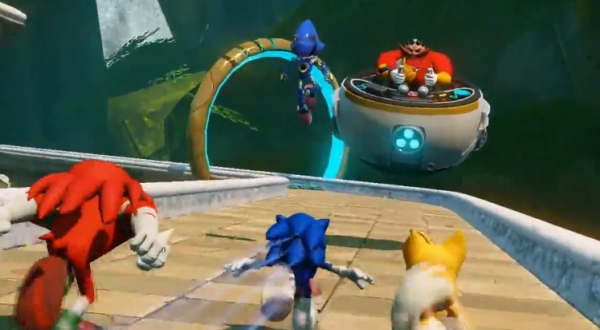 Sonic Boom is due to launch on the Wii U on November 18th but it’s already managed what appears to be deserving review scores that middle out around the 5.0 out of 10 scale. Nevertheless, given the game’s glitches and hang-ups you might need a walkthrough guide to help you get past some segments where you’ll likely to get stuck or have to restart because of an ill-thought-out platforming puzzle.

For a little backstory: Sonic Boom is a new kind of branding for Sonic. The whole “Boom” gimmick will be the launch of a new series of toys, a cartoon and video games. So for all of you asking why Knuckles looks like Frankenstein who got drunk on strawberry Jolly-Ranchers and decided to run around naked with mummy-wraps on his hands, that’s your answer.

Anyway, the review scores for Sonic Boom more than point out that the game is a bit of a half-hearted cash-in. Even still, if you bought the game and need help getting through various levels, or you just want to see the game in action before you decide to make the purchase, the walkthrough can’t hurt.

YouTube user XCageGame has a commentary-free video playlist up from start to finish of Sonic Boom on the Wii U. You can see the game in action with the videos below.

Sign in now to see your channels and recommendations!

It’s funny that there are still some problems plaguing Sonic Boom that has plagued all 3D Sonic games since the Dreamcast days. The camera work in tight-quarters during the 3D platforming segments is still kind of wonky. I also think it’s pretty funny that during the early part of the game the player gets stuck because he pressed the switch and managed to get stuck in the floor in the ancient ruins stage. Hilarious.

On the upside, I do think that it’s interesting they tried mixing in beat-’em-up combat with a side-scroller and a 3D adventure platformer, all kind of rolled into one burrito of half-baked proportions.

Based on what’s been on display the game definitely reminds me a lot of Crash Bandicoot – mostly the third game in the series.

Of course, if you really like Sonic and you’re a diehard fan of when Sega used to make good games, feel free to learn more about the game by paying a visit to the official website.