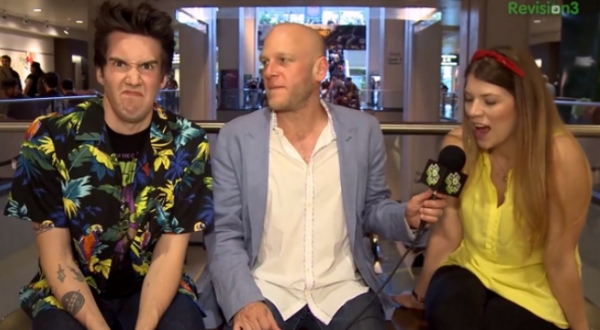 After a very brief run in the media spotlight with G4 alum Adam Sessler at the helm, Rev3Games has announced that they are done, finished, finito. The doors have closed, the windows have shut and the lights have dimmed. Pay your respects as one of the new wave media outlets folds under its own weight.

As a subsidiary of the Discovery Digital Networks, Revision 3 Games was a digital gaming outlet that brought gamers the latest and greatest in gaming news, reviews and information. Rev3 came into existence back in 2012 with a bit of fanfare and excitement. One of the more popular segments was “Address the Sess”, a hangout with Adam Sessler where he would answer questions and interact with fans.

Unfortunately for Rev3Games, the outlet lost Sessler earlier this year when he departed to start up his own consulting firm, causing the popularity of the network to spiral out of control… in a bad way.

As of November 6th, 2014 the uncontrollable spiral of losing fans and revenue resulted in Rev3 shutting down. This was highlighted via a post on Twitter…

Rev3Games on Twitter: “Thank you all SO MUCH for watching us these past few years! It’s been real. https://t.co/dauCqA5GUV”

And later they posted up a YouTube video from Tara Long giving a goodbye to the audience and rolling out all the “thank yous” and “so longs” for which such sweet partings are comprised. You can check out the video below.

What’s interesting to me is that Rev3Games was no slouch on YouTube. They had a moderate amount of subscribers – in the 438,000 range – and yet it wasn’t enough to sustain or maintain the operation.

I suppose it goes to show that just because some gaming media personalities or institutions take their schtick to YouTube doesn’t guarantee success.

There were some unsettling rumors about some issues involving Sessler behind the scenes that never quite made its way into the public light, but him and Anthony Carboni parting ways from Discovery Digital Networks worked as a foreshadowing to what would eventually become a dire fate for Rev3Games.

It’s hard to see if there will be a replacement for the show or if there will simply be a hole in YouTube where those 438,000 subscribers used to congregate for game-related entertainment. I guess it’s 438,000 people paying more attention and time  to other mega-monolith personalities like PewDiePie, Total Biscuit and YogsCast, eh?

One thought on “Rev3Games Closes Down”