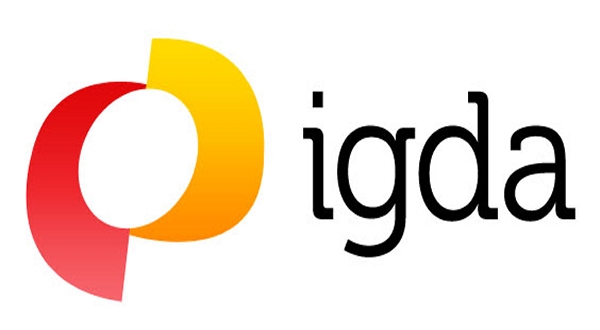 Blocklists via social media are about a step away from what some might consider to be a “blacklist”. We all know that the Game Journo Pros aren’t above blacklisting; but what about an association designed to help devs? Well, there’s a tool being employed by the International Game Developers Association – and at one point was promoted on their official website under the Mental Wellness and Self-Care section of the Online Harassment Resource page – called the “GGAutoBlocker”.

The tool basically blocks followers for some of the prominent figures of the #GamerGate consumer revolt; this includes people like Margaret Gel, one of the individuals who helps with the #GamerGate Harassment Patrol, as well lawyer Mike Cernovitch, and indie developer RogueStar Gamez. One version of the blacklist can be viewed here.

Due to the way the algorithm is designed, a lot of people are caught in the crosshairs, inadvertently being blocked because they follow a couple of the people on the blacklist. As mentioned in the readme for the tool, designed by coder Randi Harper….

“This does not rank users. It doesn't look at bios, it doesn't look at hashtags. But GamerGate appears to be completely useless at figuring out github when it's not just a wiki explaining how to be shitheads, so they'll probably never read this README and figure that part out.”

The more updated version of the list blocks approximately 9,600 Twitter users, many of which are just people who follow people who are tweeting information. Some of the names on the list are a bit more shocking, such as Canadian indie developer, Jennifer Dawe. You might remember her as being part of the CBC scandal where the broadcasting corporation conducted interviews with prominent female figures of #GamerGate but opted not to run the interviews in order to maintain a skewed view of the harassment angle.

I was curious if the IGDA had intended for this to happen – blocking indie devs, which are supposed to be some of the people they  help represent. I reached out to  Ernest Adams, the founder of the IGDA, who noted that…

“So far as I know, the block list wasn't intended to include independent developers. If an indie developer is being blocked, that's a coincidence.”

So what about RogueStar Gamez? RogueStar has specifically been added to the blacklist as someone to block. And yet at the same time, the IGDA had supported RogueStar’s FleetCOMM.

Nevertheless, Adams points to the GitHub page by Harper, the designer of the tool, and states that users can get a full understanding of how it works there.

Adams goes on to state…

“Essentially, it blocks anyone who is following more than one of the ringleaders.

“This post on the GGAutoblocker blog explains how to get whitelisted if you feel that you have been blocked in error.”

Another link to Harper’s blog is listed to explain how developers and other bystanders who have been blocked are able to get added to the whitelist.

Another developer claims he received a letter from the IGDA that he shared on KiA, in which an excerpt from the letter reads…

However, some of the people being blocked are members of the IGDA, specifically the chairman of IGDA Puerto Rico, Roberto Rosario. He took to Twitter to explain his disgust with the situation, stating…

"Why is @igda using an untested tool with such a flawed algorithm? Blocked by follow list? I've been in software development for 29 years and that is the most idiotic algorithm I've seen!

“Is not about who is relevant or not, being tagged as a harasser by this method is harassment itself
But relevancy you want? I was reverse engineering and doing emus before you could pick up a controller. I don't care I'm blocked, it is not a popularity contest, I care about being named a harasser publicly without harassment proof.”

These comments managed to catch the ire of those who are against #GamerGate, with developer David S. Gallant mocking the chairman of the IGDA Puerto Rico, stating…

“Chairman of IGDA Puerto Rico doesn't understand he was put on a block list because of who he follows.”

Others agreed that the chairman deserved to be on the list because he reprimanded Geordie Tait, a former writer for Starcity Games, over comments Tait made during a King of Pol live-stream about wanting to send anyone who supported #GamerGate to the gas chambers, and that they deserved to die like Nazis.

Even Tait’s former employers were not pleased with those comments, with Cedric Phillips, the online content coordinator for Starcity Games, responding to my inquiry about Tait, saying…

“Geordie Tait has not written an article for StarCityGames.com since 2011 and will not be doing so for the foreseeable future. His comments and thoughts are his own.”

Regardless, developers and gamers alike were outraged to find out that the IGDA would enable a list like this that so broadly sweeps across the spectrum with little regard to the individuals involved. Guilty until proven innocent – as Adams suggests, you will need to come to them to have your name whitelisted.

However, some of the individuals against #GamerGate believe that people like Rosario don’t deserve to be whitelisted, and have gone as far as to insult him for standing against the blocklist. Rosario shot back, saying…

“A misogynist?! I'm a primary sponsor of @IncludeGirls group that seeks to increase women roles in tech! Applying criminal or anti ethical labels to people on the court of public opinion without evidence in principle is wrong” 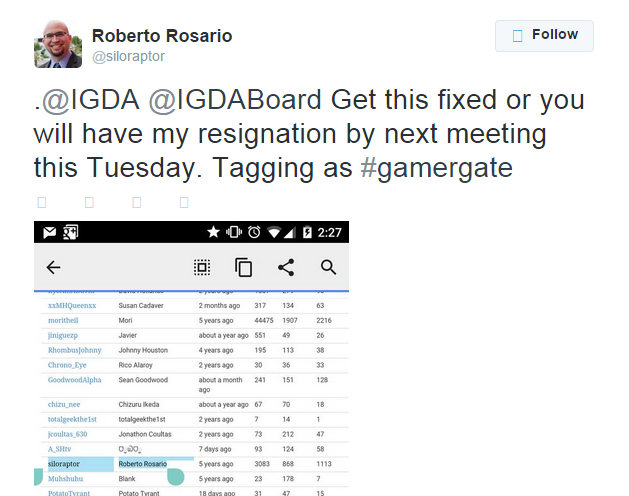 IGDA’s executive director, Kate Edwards, quickly made it known that the blocklist was not an official tool of the IGDA, stating on Twitter…

Read the disclaimer: not the IGDA's tool or list. But like people, tools are imperfect; we've removed it for now.

However, an image compiled by #GamerGate sleuths uncovered that the #GamerGate auto-blocker was made in part by Donna Prior and WIG, the IGDA’s “Women in Games” division. According to the image, and Prior’s own Linkedin page, she created the IGDA Community Management SIG back in March, 2014.

I reached out to Roberto Rosario for a comment about Ernest Adams’ initial support of the tool, as well as talking to Adams about the blocklist. I’ll update the article if Rosario responds.

As noted on a thread on Kotaku in Action, this isn’t the first time a list like this has been employed by people against #GamerGate, and former Game Journo Pros member and editor-in-chief at Polygon, Chris Grant, had a list that caused a few ripples in the Twitter-sphere back in the early days of the revolt, even getting NeoGaf to react negatively to it.

[Update:] A post on the GitHub page explains that the “Blocklist” has been renamed to the “Sourcelist”, with  creator Randi Harper stating…

This is not creating a "blacklist" to keep people out of the industry, you unemployed neckbeard (if you could grow a beard) cockwaffles. It is creating a "blocklist" so normal people don't have to listen to your incoherent looneybin conspiracy theories peppered by whatever's on your political word-of-the-day calendar.