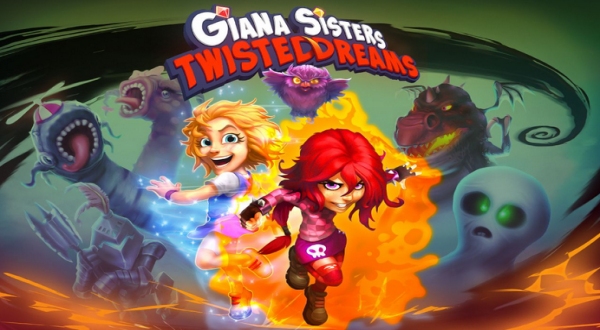 If you’ve been eagerly awaiting the release of the Giana Sisters: Twisted Dreams on the Xbox One and PS4, you’re in luck. The game is getting an HD director’s cut release on the eighth-gen twins starting mid-December, next month.

The HD director’s cut will not only include the base game but it’ll also feature the bundled content with the extra features from “Rise of the Owlverlord”. In addition to that the Xbox One and PS4 versions of the game will be fitted with some nice resolution and frame-rate bumps. The press release doesn’t clarify but I’m going to assume that the Holy Grail of 1080p and 60fps is secured. Well, we can assume that the Xbox One will hit 1080p… it doesn’t always manage to do so with some of today’s games.

But console gamers won’t be the only ones getting some goodies this holiday season. Beginning December 5th, 2014, next month, the team will roll out a new “Dream Rush” competitive multiplayer map that will be free to download for Steam and GOG users.

For those of you who have no idea what the Giana Sisters is all about, you can check out a few snippets of gameplay below.

Black Forest Games, the same group behind Dieselstormers, the multiplayer, diesel-punk action title, originally managed to get Giana Sisters Kickstarted back during the rush of indie titles being crowd-funded back in 2012. The game was also simultaneously greenlit for release on Steam.

It’s nice to see new studios making waves in the industry and putting out some new content; the team is even planning on a sequel to the Giana Sisters targeting 2016. I have yet to get around to playing Giana Sisters but it and Dieselstormers are on the “to-play list”.

You can look for the HD director’s cut of the game to land on the Xbox One starting December 12th, next month. It’ll arrive on the PS4 in North America December 9th, and in Europe on the PS4 beginning December 10th. Need more info? Feel free to check out the official website.