#GamerGate: ‘Your Check – From A Publisher – Is In The Mail’ States GJP Thread 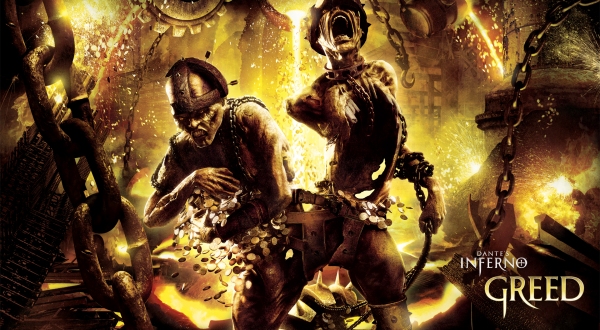 Disclosure, transparency and ethical lines as a journalist are always being considered and deliberated by those in a position where the constant run-in with a conflict of interest can be had. It’s not hard to breach a line when it’s sometimes not so easily and readily laid out.  But what happens when the line of ethics is clear and present?

One of the threads in the Game Journo Pros mailing group dealt exactly with what the headline states: what happens when a check from a publisher arrives in the mail? Only, it’s a check from a class-action lawsuit… and the journalist was part of that lawsuit. Is there a need to disclose to readers that a check arrived in the mail directly from a publisher? Does it create a conflict of interest?

Back on November 5th, 2013, one of the members of the Game Journo Pros – a current writer for Polygon, Samit Sarkar – posed the questionin a thread called ‘Your Check – From A Publisher – Is In The Mail’ about a conflict of interest, as he was unsure about the ethical line of receiving a check from EA as part of the Madden NFL lawsuit while still covering them in the news in articles like the ones covered in the past here or here, or the ones that followed here and here. Sarkar linked to a Kotaku article where writer Owen Good showcased the check from the Madden NFL EA monopoly lawsuit for $64.14, and explained the situation to the public.

Kyle Orland, the creator of the Game Journo Pros group, was the first to reply in the thread, stating the following…

“I don't see this as ethically questionable at all, really. Yeah, you're a game journalist, but in this context you're a consumer that a court determined is entitled to a little bit of money, alongside millions of others. There's really no way to interpret this as any type of quid pro quo or even any kind of special consideration coming from your position as someone who covers EA. You're receiving a court-ordered settlement because you're one of millions that bought a game, not because you're a journalist. If someone wanted to spin that as how they're bribing us now, it seems... pretty inefficient.”

“If you're being hyper-vigilant, I could see refusing it on general principle and to avoid even a hint of impropriety and financial gain directly from a publisher. If you've ever taken a water bottle at an E3 press conference, though, I'd say you're already much more "compromised" than you'd be if you took this check.”

This was followed by input from two other members of the Game Journo Pros. 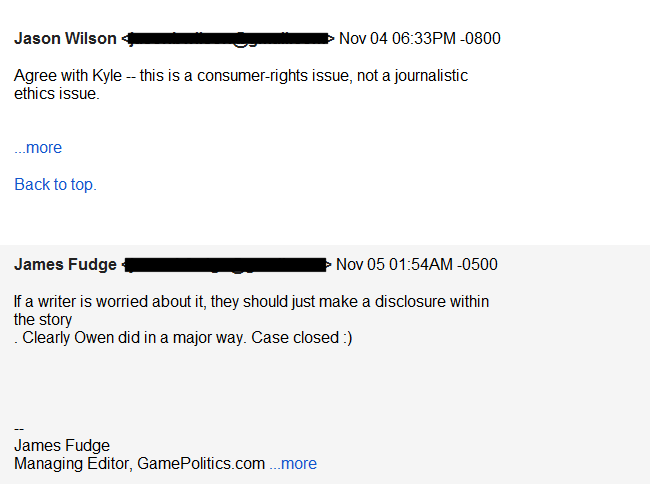 Britton Peele from the Dallas Morning News made a brief mention about the ethical lines of recusing from reporting on companies that a journalist invests in. Stating the following.

Orland chimed in once again, stating…

“That's a decent point that applies more to when the case was winding its way through the courts: if you were going to potentially benefit from the outcome of that case, it could be seen as affecting your coverage of the company. I was looking at it from the present position, with a ruling handed down and the journalist just happening to be part of the benefiting class, but [redacted] is probably right that you have to look at the whole arc of the case and the coverage surrounding it.”

“I think it's a lot less shady than direct investment in a company, where you stand to directly benefit from every part of the company's continued success, rather than one legal case. But yeah, it is less clear cut than I originally thought.”

According to the SPJ Code of Ethics, two topics apply to the situation at hand. Under the section of “Acting Independently”…

“Refuse gifts, favors, fees, free travel and special treatment, and avoid political and other outside activities that may compromise integrity or impartiality, or may damage credibility.”

If the money/monies could be perceived as a conflict of interest, then avoid partaking in the matter, no matter how little the monetary transaction may be. However, if the monetary transaction is not viewed by the involved parties as a conflict of interest, then the SPJ clearly lays out what should happen under the section of “Be Accountable and Transparent”…

“Explain ethical choices and processes to audiences. Encourage a civil dialogue with the public about journalistic practices, coverage and news content.”

The issue of explaining and discussing ethical choices and processes has never really been a top priority for gaming journalists and this is part of what led up to #GamerGate happening in the first place. Ironically enough, Owen Good – from the Kotaku article discussing the Madden NFL lawsuit – actually did follow the SPJ’s Code of Ethics  by discussing the issue with the public.

Giant Bomb’s Patrick Klepek adhered to the rule of the SPJ Code of Ethics, stating the following, with Kyle Orland following up with another example from EA pushing the lines for media journalists. 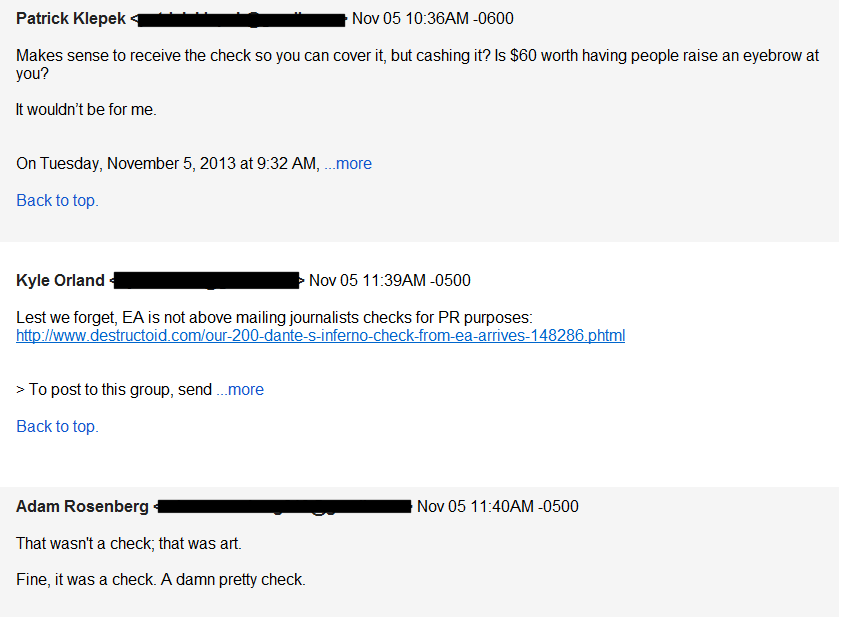 As for the “promotional” checks Electronic Arts sent out to various game journalists… only three journalists confirmed receiving them, with Brian Crecente taking the opportunity to burn his check as a show of not being swayed by greed.

As some of you may know, accepting a promotional check from a publisher and not disclosing this to the public could be considered bribery.

I did reach out to the PR evolved in the campaign to find out how many checks they sent out in total but the reps for the promo campaign declined to respond.

One member of the group, Mike Wehner, from The Escapist, posted in response to EA’s $200 promo checks for Dante’s Inferno…

Orland’s last post in the thread was as follows…

“Yes, being part of the settlement would probably only directly affect the way you covered the actual court case. But there's at least the possibility of indirect influence on other coverage of the publisher. "I'm going to be harder on EA so their PR suffers and they're less well-equipped to defend this suit I'm a party to."

“It's a stretch, and I doubt any journalist would actually think this way for such a petty reward (in both senses of the word) but appearance can be as important as actual impropriety when it comes to these kinds of ethical questions. That said, it's a bit of a stretch even as far as appearances are concerned, so I'd probably lean towards being OK with it. But it's not 100% clear cut.”

Chris Dahlen, former editor-in-chief at Kill Screen Magazine, had mentioned in a previous thread that each journalist will draw his or her own line as far as ethics go, when it comes to conflicts of interest. However, the SPJ Code of Ethics makes it pretty clear for most cases, including this one.

I reached out to Samit Sarkar for further comment on the situation, but at the time of the publishing of this piece there hasn’t been a response.

After repeated attempts to reach out, there has also been no response from EA’s representatives regarding the promo checks for Dante’s Inferno, and no other gaming journalists have been willing to acknowledge that they received them, outside of the three individuals mentioned in the article.

[Update:] Samit Sarkar issued a response following the publication of the article, stating…

I felt ethically uneasy about the idea of accepting such a check in the first place; note that I didn't even file a claim for one, and thus never received one. But had I filed a claim and received a check, I certainly would have felt it necessary to disclose that fact somewhere. I will note that I bought the game in question for that settlement -- the PS3 version of Madden NFL 08 in August 2007 -- before ever writing about video games in any professional capacity (I started at Destructoid in February 2008, and that was my first gig in game journalism). It still felt a bit suspect to me. Regardless, if I had gotten a check, I would not have kept the money.

Of course, I would have discussed any such disclosure with my bosses at Polygon and, if it went that far, with our parent company's legal team. My guess is that they would not have considered this settlement check to be a potential conflict of interest, but I think they would have agreed that disclosure doesn't hurt -- which is my general policy in these types of situations. I emailed GJP about the settlement check because I was curious to see what my colleagues across the games media thought about it, and as you can see in the full thread, there was a healthy debate over the issue between 10 or so different people in the GJP group.

In other words, the email thread in question is a shining example of the kind of "shop talk" discussion that GJP was created for, and I'm still sad that the group ended up as yet another casualty of GamerGate.

13 thoughts on “#GamerGate: ‘Your Check – From A Publisher – Is In The Mail’ States GJP Thread”