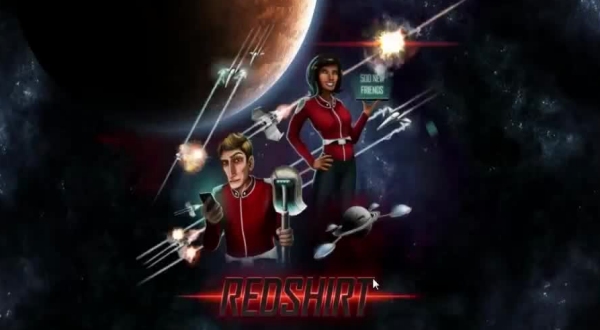 As #GamerGate continues to press on, more and more connections between game journalists and developers that could be construed as a conflict of interest have surfaced. It all started with a threads on 8chan and Kotaku In Action discussing close ties between game journalists and an indie developer that eventually spread out onto social media. Tech Raptor has a very detailed account of the situation, mostly citing the close ties between the developer of a game called Redshirt and some of the gaming journalists who covered the title.

There are two cases that were made very clear in the piece and it involved Kris Ligman, a prominent jury member for IndieCade, as well as a curator for Critical Distance and a news editor for Gamasutra, and Cara Ellison, a freelancer who has contributed to a number of different gaming sites.

The issue is that the indie game Redshirt – designed by a single developer, Mitu Khandaker-Kokoris, and published by Positech Games – comes across as a conflict of interest for the journalists who failed to disclose their relationships with the developer. For instance, Kris Ligman, despite being a “super juror” for IndieCade and having published an article about Redshirt on Gamasutra, is also a recipient of funding via Patreon by Khandaker-Kokoris. Cara Ellison is also supported by Khandaker-Kokoris on Patreon, but this isn’t disclosed in an article written on October 10th, 2014 over on Rock, Paper, Shotgun.

Some people considered this a serious breach of ethics on the part of the journalists.

I did reach out to Positech Games’ Cliff Harris to find out how involved Khandaker-Kokoris was with the promotion of Redshirt, and he did state that she did help out with promoting the game…

This is common for most indie developers. Positech Games was in charge of promoting the title, as its publisher. They did release various presskits from the usual Games Press outlet, but sometimes the developers will go the extra mile in order to get eyes on their game. It’s always the job of the journalist to separate subject from friend, and disclose necessary ties that could create the appearance of a conflict of interest.

With that said, I also reached out to Mitu Khandaker-Kokoris, the designer of Redshirt. However, she opted to post a blog about her ties to the game journalists who covered her project, stating…

“As the publisher, Positech had effectively handled all the marketing for the game, in terms of promoted posts, banner ads, arranging for exhibiting Redshirt at various expos (EGX, Rezzed, MCM Comic Con, etc.), and also handling press releases when the game was launched. The point being, so I could get on with development — for my first game, it worked very well. Though, as the developer, I’d made devlogs, did all the subsequent interviews about the game, as well as the obvious tweeting-about-my-game-to-the-point-of-obnoxiousness and talking about it to anyone who’d listen.”

“Yes, this is a tiny industry, and for indie developers especially – who are not mediated and restricted by PR people – game critics and journalists are our peers. We may keep up with each other’s thoughts on current issues via Twitter, we may follow their work, and we develop a level of professional respect for them. Sometimes, this evolves into a friendship based on “yes, I agree with what you’re saying and I want you and your message to succeed, because we’re on the same page re: the future of games” and for some people, that can grow into a more personal friendship too. But, I’ve not witnessed anyone covering anything purely for the sake of ‘friendship’ — after all, no-one feels like they ‘owe’ each other anything (what would they owe each other?), other than wanting to support the work of people who they see as doing something important for the future of games.”

Kokoris does state in the post that she did contribute funds to help see Cara Ellison’s project(s) grow and that she has contributed to other Patreons as well because she appreciates the work that they do.

I did reach out to Ellison for a statement, but at the time of the publishing of this article I have not received a response. I was also unable to get in touch with Kris Ligman from Gamasutra for a quote.

However, Total Biscuit, popular gaming personality, commentator and critic, did mention the following on Twitter that aptly suits the situation…

“When I hear things like “Gaming journalists are my peers” from game developers, that makes me scratch my head a little. I'd never blame a developer (subject) for getting close to a journalist, I'd blame the journalist for allowing it.”

This issue popped up before when obvious conflicts of interest were made apparent with Leigh Alexander from Gamasutra and Ben Kuchera from Polygon, having financial ties to some of the subjects they wrote about. To this day, Ben Kuchera has yet to acknowledge or address the situation involving his conflict of interest or perceived misbehavior as a media pundit.