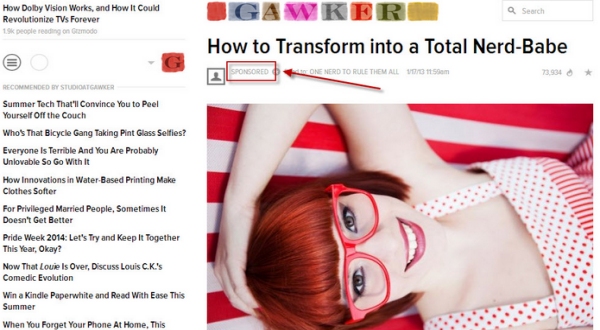 The Federal Trade Commission will be expanding their consumer information FAQ regarding endorsements, affiliate links and native advertising from media websites and YouTubers sometime in the early goings of 2015.

Angry consumers who have been staging a revolt against corrupt media practices under the hashtag #GamerGate have been actively seeking recourse for websites who have been using their position and platform to peddle advertisements and endorsements without properly disclosing the nature of their relationship or making those relationships more transparent.

Well, the FTC is aware of the complaints and will be amending their FAQs and providing consumers with more useful information examples to better recognize and report false dealings from major websites and YouTubers who cross the endorsement-line without properly disclosing their relationship.

One reader shared their e-mail conversation they had with the director of the division handling an initiative called “Operation Full Disclosure”. However, the amendments of examples relating to websites failing to disclose advertising relationships – such has been the case with Gawker, a prime target of the #GamerGate consumer revolt – are not a part of “Operation Full Disclosure”, but will receive a different measure of care from the FTC, with the head of the division stating…

“My staff is currently working on creating updated guidance to address the very issues you raise, as well as similar issues we have been getting questions about, such as reviews of video games on YouTube (where the reviewer got the game for free), and the need to disclose if you are endorsing a product as part of a contest. In addition, I don’t think extending Operation Full Disclosure is the right model.”

It was also later stated that the amendment to the consumer information examples isn’t just related to YouTubers. It was made explicitly clear that this issue also crosses over into the website category as well, with head of the division stating…

“We are updating our FAQs to address a variety of different scenarios that we've gotten questions about, and affiliate links are one of those issues. Note we are not issuing new guidelines; the current Endorsement Guides will remain in effect. We are simply adding FAQs to address the application of the Endorsement Guides (and Section 5 of the FTC Act) to different scenarios, including affiliate links.”

Unfortunately the name of the individual and contact information could not be displayed publicly because the last time it happened the FTC was bombarded with e-mails and phone calls; there’s also been a group of trolls who have been attacking people whenever their information has been made public, so it was requested by the FTC that the names and contact info not be made public. Nevertheless, I reached out to the FTC to confirm all of the above information and I was told…

“Shortly after we revised the Guides, we also posted some consumer and business education materials to provide further guidance, including FAQs (which we called “What People Are Asking”). We are currently planning to update these FAQs to address endorsement issues we’re seeing in the marketplace and getting questions about, such as YouTubers.”

The updates to the information and education materials will roughly be made available some time in early 2015. This is a major win for consumers and should make it easier to spot out and report websites that breach the line when it comes to a lack of disclosure for endorsements and advertisements.

[Update:] Techraptor is reporting that Kotaku has updated some of their past articles to reflect their affiliate ties and endorsements in their articles where disclosure wasn’t previously made apparent or clear. Kotaku In Action has a few examples of Kotaku’s retroactive updates acknowledging their affiliate links.