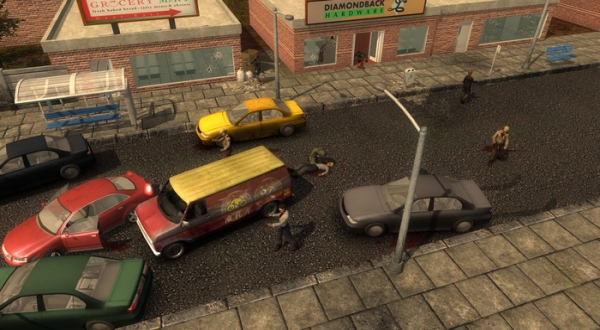 Oh, what’s this? Real gaming news? Yeah, we’ll get back to the corruption in gaming later (and unfortunately it appears it extends beyond gaming and into a much larger media spectrum; but more on that later). For now, we can take it easy knowing that Dead State will officially exit Early Access and will be available on Steam starting December 4th.

Over on the Kickstarter update page, developers DoubleBear Productions made a brief update acknowledging that the game will be exiting Early Access on Steam and will launch as a “fully matured” game, writing…

“That's right: on December 4th, 2014 - just over a month away - Dead State will emerge from the cocoon of Early Access and transform into a beautiful, fully matured game!”

For those of you who don’t know, the game is an open-world, isometric survival game. It’s designed in a similar vein to other games like Bohemia’s DayZ or Undead Studios’ State of Decay.

Players will gather supplies, struggle through a real-time day and night cycle and recruit allies, craft weapons and attempt to survive. The game actually looks pretty slick. You can see it in action with the video below, courtesy of YouTuber sloshworks.

Welcome to Dead State: The Zombie Survival RPG! This is an Early Access Beta version of the game and is not representative of the final product. Dead State is a new compelling, high-tension RPG set at the beginning of the zombie apocalypse by DoubleBear Productions.

Now I haven’t had time to actually play the game or give it a good enough look over to determine if it’s worth the price of entry, but a lot of the general consensus (that I’ve only skimmed over) seems to be that this is a pretty rad game, and DoubleBear wants to keep it that way.

They plan to roll out one more patch before focusing on prettying up the game for mass consumption, writing…

“Aside from Patch #4 going out later today/tonight, we plan to release one final patch before the launch; after that, we’re going to focus our full attention on fixing, balancing, and polishing Dead State until we run full speed across the finish line. All you have to do is keep playing, having fun, and sharing your feedback with us, and we’ll do the rest.”

You can look to get in on the zombie-survival action starting next month. It seems amazing that we’re already near the end of the year and prepping for 2015. Where did 2014 go?

Anyway, you can learn more about Dead State by paying a visit to the official Kickstarter page.