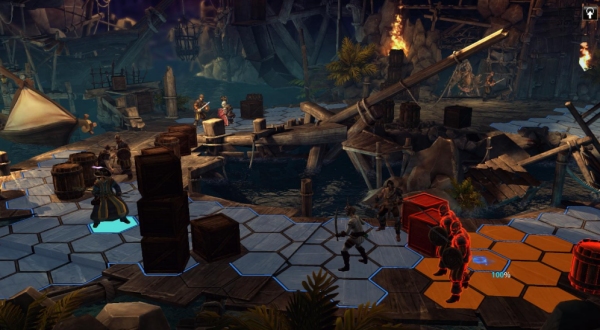 Daedalic Entertainment’s Blackguards reminded me of an old throwback to a classic turn-based, role-playing strategy game from the mid-1990s. It had a bit of that Betray at Krondor tossed in with the grit and grunge from Baldur’s Gate and Planescape Torment. Well, the sequel to this year’s tactical-RPG is due for launch on January 20th, 2015 for $29.99.

The original Blackguards was kind of fun and I found myself having some measure of fun with the game, but at the same time I also found myself equally frustrated at some of the limits of the game’s design since it was very similar to Final Fantasy Tactics. The lack of being able to over-train and grind like in traditional RPGs kind of grated on me, but that’s just me; some gamers love that kind of challenge.

“A major influence into the design of Blackguards 2 was feedback from gamers, press and community based on the original Blackguards-game. Taking this input into account, Daedalic Entertainment’s team has added new features, unique enemies and enhanced and improved gameplay to Blackguards 2. In the game, battles will be even more epic, and their handling has been significantly tweaked, to make them more accessible, yet also more challenging.”

I hope by accessible they don’t mean dumbing the game down. I didn’t mind the battles being as hard as they were, I just kind of wish there were more preparatory ways of leveling up the characters instead of barely scraping by. Anyway, the difficulty of Blackguards was 100% old-school. So if you liked your games with some meat on the challenge bar, you definitely got some meat with Blackguards.

You can check out the teaser trailer for Blackguards 2 with the video below.

I do kind of long for more tactical role-playing games of this sort, I just don’t think the medieval, high-fantasy grit was really my kind of thing. My a 17th century Gothic RPG instead? Just to mix things up a bit.

Anyway, you can look for Blackguards 2 late into the first month of 2015, next year for Steam, Good Old Games and other participating digital distributors. It’s just barely two months away. You can learn more about the game by paying a visit to the official website.