Females, Minorities Of #GamerGate Raise Their Voices With #NotYourShield Project 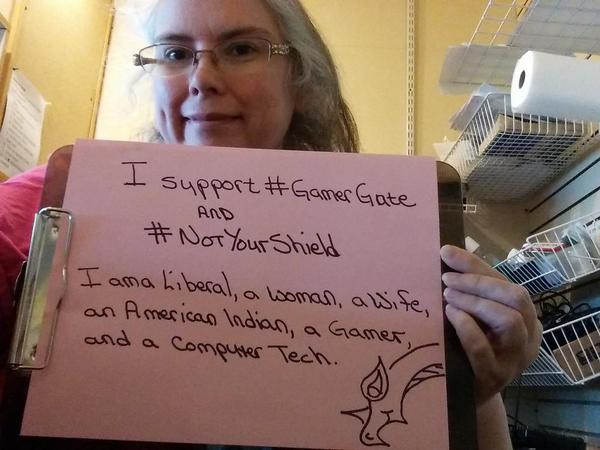 One of the most disheartening things about #GamerGate isn’t the harassment and abuse being tossed around by one person or another from one side or another; it’s not even the misrepresentation of facts and the misappropriation of platforms by games media and mainstream media alike. The one thing that’s most disheartening about #GamerGate is that the people who oppose it have worked tirelessly to strip away the voices, identity and agency of women, minorities, those in the LGBT community and every other person around the world that doesn’t fit into the stereotypical narrative being shopped around by people who call themselves “Social Justice Warriors”.

One of the ways that the opposition of #GamerGate have been working hard to under the movement is to suppress and discount the individuals who stand up for themselves that don’t fit into the “cishet, straight-white male” stereotype. The media and their like-minded ilk have actively ignored, slandered or attacked anyone trying to speak up to support #GamerGate that isn’t a white male.

However, even though the media is actively being sexist, racist and discriminatory against many different individuals and communities – further proving both their bias and corruption – the community itself has decided to band together and thwart the negative image by the media that’s been dumped on #GamerGate; enter the #NotYourShield project.

A new sub-Reddit offers women and minorities an opportunity to share their identity outside of the Twitter hashtags. The idea is to help grow the voice of the voiceless by leveraging a platform outside of traditional media. It’s the consumer utilizing new-wave media to get the information out there.

The sub-Reddit contains things like pictures of the women and minorities supporting #GamerGate through the #NotYourShield hashtag, as well as images and videos, like the one below from YouTuber Cakesphere, discussing her experience with #GamerGate.

Thoughts on #NotYourShield: Why SJWs don’t represent me

Sorry this is so long. I have a lot of thoughts and I didn’t even get through half of them. Recommended reading: https://nastythingssaidabout.wordpress.com/2014/08/26/the-terrible-misogyny-in-the-games-industry/

Another video that’s been circulating lately is the one that works as a counterpoint to the highly biased and one-sided MSNBC report where #GamerGate is once again labeled as a “misogynistic hate movement”.

The Lie Heard Around the World #GamerGate #NotYourShield

MSNBC allows Brianna Wu to spout lie after lie about #GamerGate. Big thanks to all the wonderful ladies of GamerGate for all their help.

I find it highly improbable that a hate movement designed to attack and harass women would have such strong female representation – including several prominent females from gaming websites like GameFront and GamesNosh, as well as American Enterprise Institute scholar, Dr. Christina Hoff Sommers.

If you’re a female, minority, individual of color, part of the LGBT community or disabled, feel free to contribute to the #NotYourShield project on Reddit to help further spread the word and showcase that there is a diverse and multicultural collection of human beings fighting against a very corrupt and tainted system. 5 thoughts on “Females, Minorities Of #GamerGate Raise Their Voices With #NotYourShield Project”