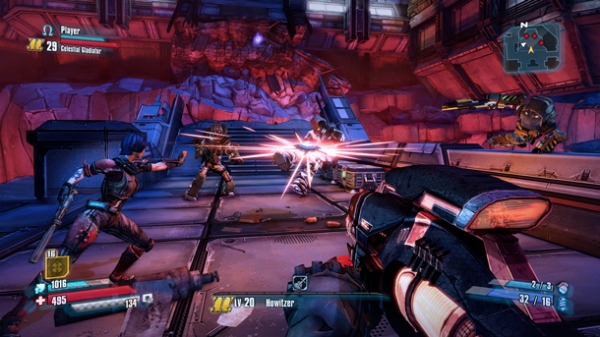 Borderlands: The Pre-Sequel has gone gold. For the uninitiated it means that development on the core game is complete and the gold master disc has been produced and prepped for the printing of near countless copies. The game’s “going gold” arrives amidst some rather anti-consumer comments made by Gearbox Software’s Randy Pitchford.

The creators of Duke Nukem: Forever and Aliens: Colonial Marines (though they can only really take partial credit since TimeGate Studios did a lot of the important work, as alleged by some the individuals contracted to work on the game), are expecting Borderlands: The Pre-Sequel to shift about a million copies.

However, it’s funny that Randy Pitchford, the Gearbox Software president, made some pretty unflattering comments about potential consumers when he ran to the aid of Gearxbo boy-toy Anthony Burch, after Burch firmly put both his feet in his mouth.

Pitchford, in his infinite wisdom, decided that it would be better to throw his own customer base under the bus instead of acknowledge that maybe Burch had crossed the line when he accused #GamerGate of supporting child pornography, saying…

“How about this instead? I block you, and get the back of a brilliant, hard working talent.” … “You called one of the hardest working, funniest guys I know *lazy*. Don’t go after my team.” … “you need to get a job.” “[Anthony] lead wrote a 10m+ unit selling game. That puts him in a very rare club. When you beat that, [let me know].”

“A smart business will be quick to drop expensive customers. I am not being smart right now. ‘Expensive customers’ are those who cost more to support than they are worth. Biz School 101 says, “Drop them.”

“Some people cost us more than they gain us. They are negative value.”

The conversation took place with #GamerGate figurehead the Internet Aristocrat. Pitchford didn’t come out looking better in the exchange and, like anyone who realized that giving oral satisfaction to their own feet can look really bad in the long run, decided to delete his tweets.

Nevertheless, Pitchford expects Borderlands: The Pre-Sequel to sell a breezy million units out of the gate. It’s a sad trend we see from those who believe they’re in power by talking down to their own audience while expecting that same audience to put enough coin in their coffers to enable the creator to buy golden toilets and diamond yachts.

I’m curious to see what the three months sales figures will look like for The Pre-Sequel on the two-fold account that Gearbox is quickly sullying their own reputation and charging $60 for what’s essentially a glorified expansion pack. That’s not to mention all the DLC that the company is likely to riddle the game with.

You can learn more about Borderlands: The Pre-Sequel by paying a visit to the game’s official website. It’s due for release on October 14th in two weeks.