Warframe Now Available For Xbox One 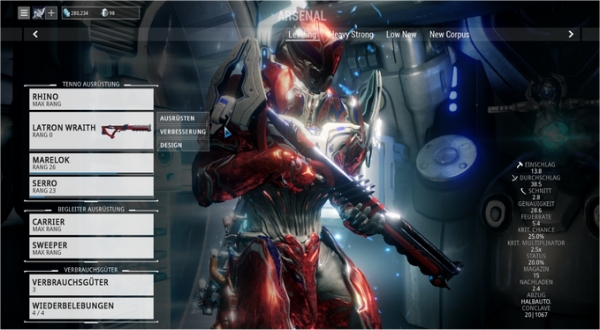 If you’ve always dreamed of being an intergalactic space-ninja, now is the time to take up that career opportunity with Digital Extremes’ Warframe. Offering unique travel employment packages such as venturing to the rings of Saturn, exploring the icy surfaces of Pluto or enjoying a tour through the dark mines of Mars; the job of a Tenno is both exciting and geographically diverse.

You’ll also receive special health benefits, such as increased titanium-organic alloy armor that helps increase your bodily threshold to become impervious to bullets, laser fire and even sharp knives and large blunt objects. If you enjoy a job with great physical and exercise opportunities, you’ll love the unique and varied array of equipment that help both your hand-eye coordination and your ability to slice, dice and eviscerate anyone who gets in your way.

Warframe was easily one of my favorite games of 2013. I loved, loved, loved it. Even on a limited schedule I clocked in a hundred breezy hours right off the bat and dumped some real-life coin into the coffers of Digital Extremes because I felt they deserved it, and because they offered a quality service that I felt was conducive to a growing community and celebrating an awesome game.

What’s more is that the game features both male and female Tenno Warframe skins, so there’s no such thing as the game being designed to foster or hoist the image of newer games being designed for “straight white males”. You have an eclectic choosing of Warframes to play as in the game and Digital Extremes has done a superb job of not making anyone feel excluded, despite many of the cries made against core games culture by gaming media.

Regardless of gender politics dictating a discourse outside of this forum, Digital Extremes has been working hard to get Warframe up and out on as many platforms as possible, including Microsoft’s Xbox One.

The company sent out word today that the free-to-play title – after garnering more than 10 million registered users, as reported by Attack of the Fanboy – is available right now on the Xbox One.

Unfortunately you’ll still need Xbox Live Gold to play, but you won’t have to pay anything to actually enjoy the game.

“Warframe has been a labor of love for our team for over a decade,” … “We believed in this concept when no one else did and it’s so satisfying to see the incredible reception it’s received from the gaming world – and now with the Xbox One launch it will just keep getting better.”

I’ve talked up this game so far throughout this blog without actually talking about the game. Amazing, right? Well, I think seeing the game in action will do it more justice than what little amounts of expository praise I could ever think to muster for such a title. Check out the gameplay video below.

Welcome to Warframe Xbox One

Warframe comes to Xbox One on September 2! Ninjas Play Free. Welcome new Tenno and hear from our creative director, Steve Sinclair on what’s in store for you. Visit https://warframe.com/ to join in our community. Go to www.warframe.com for more news and info.

I’m no big fan of Xbox Live, and I can’t see myself paying to play Warframe. However, I would suggest either downloading the game on PC or picking up a PS4 to play it since all free-to-play games on Sony’s console are actually free and you won’t have to worry about monthly (or annual) subscriptions to play free games.

If you already have Xbox Live, you can jump into Warframe right now, or learn more about the game by paying a visit to the official website.