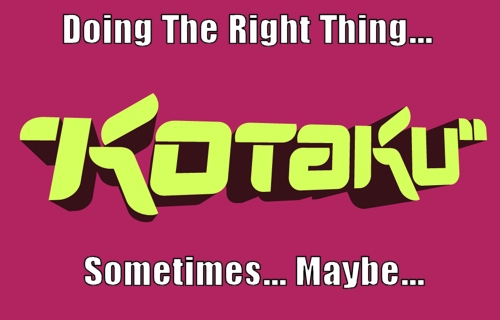 One of the things that a lot of gamers are finally coming to terms with is that something isn’t right in the world of games media. That festering pot of doubt sitting in the pit of our stomachs, wrapped in tinfoil and burning with the rage of a thousand suns has finally spilled out in a way that cannot be contained. During this #GamerGate movement we’re finally starting to peel away the layers of corruption on the onion that is games journalism, and at the center of it we see all the cabalistic tendencies of collusion are residing. All that is to say: the radical “social justice warriors” preach and teach fairness, equality, acceptance, tolerance and inclusion, but they practice something completely different.

Recently, Kotaku writer Jason Schreier responded to a user in the comment section of Kotaku about the site’s lack of coverage of The Fine Young Capitalists. If you really have no idea what they’re all about, this article about them attempting to move forward with their project sums it up for those of you coming into this late.

I’m not going to paraphrase, quote or reprint what Schreier wrote, because by all accounts I want doubters, naysayers, defenders, detractors, excusers, ignorers and enablers to see this with their own eyes (also, just in case the comment gets edited or modified after this article goes live, because it’s not like that hasn’t happened before). It comes from the article about Kotaku’s revised policies from back on August 26th (Archive.today link). 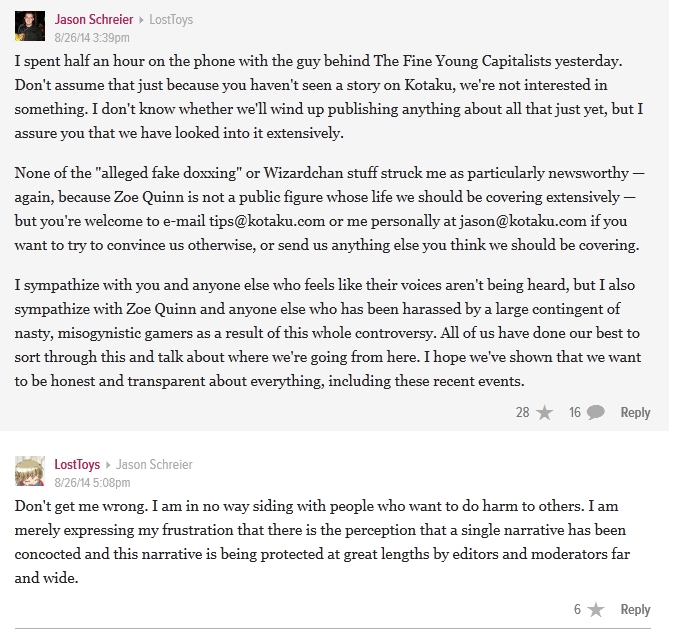 That was eight days ago, as of the writing of this article. Eight days. While I’m writing this, here is what Kotaku’s front page looks like.

Jason supposedly looked into their case “extensively”, but notes that he doesn’t want to cover them being doxxed, shutdown and attacked and hacked multiple times during their most recent IndieGoGo run.

Now heck, I tossed up a few articles for The Fine Young Capitalists and 4chan’s collaborative efforts to spotlight and inform the community about influential female designers and experts within the interactive entertainment industry. It took me all about 15 minutes or so to write each article about Anna Kipnis and Corrrinne Yu. You mean to tell me that Kotaku didn’t have one staff member available for eight days to spare 15 minutes and throw up a few sentences, a YouTube video and a link to their IndieGoGo page?

Heck, Luke Plunkett just did an article about Minecraft on the Xbox One $5 upgrade program that clocked in at only 100 words. 100 words. How long did that take you Luke? Oh, I’ll spare you the pleasure of having to click through a Kotaku link. Here’s an image of the article I’m talking about.

This nothingness article about GTA IV [via Archive.today] is basically just a sneeze on the screen. I mean, when prioritizing stories, a serious feminist group that could actually help grow the industry is far less important than a story shorter than a 4chan gif about Niko dying after throwing a bowling ball… Really? Really Kotaku? Obviously an old mod in GTA IV is more important than TFYC… obviously.

Heck, here’s another article about upskirt shots in a Japanese Otaku game [via GreatjobKotaku] doesn’t even appear to contain a hundred words. Oh and you’ll also love this link here. You can actually give them hits on those two links because, why not?  I wonder what Ms. Sarkeesian would think of your coverage of the upskirt simulator?

Anyway, even if Kotaku wasn’t going to tackle the ties that TFYC had to one of Silverstring Media’s PR associates, the least they could have done was a no-nothing article about their efforts, right? Right? I mean, TFYC are pro-feminist; they fit the bill for everything a real social justice advocate would want to promote: helping female creative directors get their foot into the door,  helping female developers establish potential brands and offering direct communication with a diverse community. Those are all good things… right? Or did they not bring enough burgers and fries to Gawker’s doorstep?

Now I imagine that Jason Schreier probably labels himself as a fighter against injustice, or maybe one who seeks truth and fairness for those who need it (I can’t seem to say the same for Luke Plunkett with this article tarnishing his name: https://archive.today/YlBhH).

But getting back on track… Jason  wrote two articles lambasting Dragon’s Crown artist and president, George Kamitani, from Vanillaware over his depiction of the women in the game. The first article went up April 12th, 2013. The second article went up April 23rd, 2013 (via Archive.today). It was posted 19 hours after George Kamitani sent Schreier a Facebook message with an image. In his own words, Schreier confirms this time frame, writing…

“Today, Dragon’s Crown artist George Kamitani—who is not a 14-year-old boy and in fact is the president of Vanillaware, a Japanese developer known for games like Odin Sphere and Muramasa—took to his Facebook page to respond to me.”

The delay between the first and second article was only intervened by the slow response of Kamitani; as Schreier had no qualms about posting a second article as quickly as possible. It was an exclusive story after all. 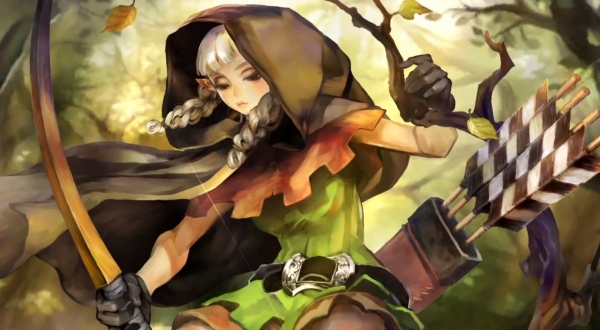 Fighting against sexism is obviously a very important issue at Kotaku (when they aren’t fishing for clicks). I mean, I do have to tip my hat off to their full coverage of the Brad Wardell case, which involved a spat between Wardell, Stardock’s CEO, and a former employee. As it currently stands, the coverage is pretty thorough and very detailed. Dare I say, Kotaku actually did a fine job covering the angle …after it had been amended, fixed and updated, of course.

But what about developer Max Temkin who made Cards Against Humanity? Well, in the case of Temkin, Kotaku published a damning article about Max  being accused of sexual assault based on…  a blog post. Oh… the cards against humanity.

Four days after the blog post on Tumblr went live (yes, Tumblr), Kotaku printed this article titled “A Different Way To Respond to A Rape Accusation” (archive.today). The article was re-blogged by Jezebel. Temkin was guilty until proven innocent… except… no charges were ever filed and the rape accusation went no further than social media gossip. Lovely.

Essentially, Temkin is now forever stained on the internet for being a potential rapist based on private conversations and some blog posts thanks to Kotaku.

This is not to justify Max Temkin at all, because I don’t even know the guy. He really could be a rapist for all we know, but that’s not what the evidence, any actual charges or a judge has said, so then why the witch hunt on Temkin? Kotaku’s lengthy [and then modified] coverage of something based on flimsy evidence certainly doesn’t shy them away from scandalous material… right? Right?

Oh, except when it involves The Fine Young Capitalists. What did Jason say in that post again?

Now it turns out the Wizardchan incident is some very crazy stuff. How Jason can say it isn’t “particularly newsworthy” is beyond inane. In fact, their story is so detailed and unbelievable that it’s all laid out in this imgur here, [via Reddit] since posting it on this blog would literally fill up like five pages. Maybe a sequel to the coverage of a pin-up model who plays Street Fighter IV [via Archive.today] is more compelling news, no?

So your publication can do an extensive article attempting to kill a guy’s career and public life on the internet based on a tumblr post (could you imagine if that’s how the Washington post curated stories? Wow) but you can’t do a simple story about The Fine Young Capitalists because you don’t want to bring up the fact that there is evidence allegedly linking Quinn and Silverstring Media to having some part in shutting down The Fine Young Capitalists and costing them $10,000?  Or is it because of the media’s excessively deep ties to Silverstring? It can’t be because of standards. The links about the upskirt simulator proves otherwise. It can’t be because of evidence, your poorly researched story about Temkin proves otherwise (and was/is the sort of thing that ruins people’s lives forever). So why the the reticence about this fine group called The Fine Young Capitalists?

Heck, I even tweeted at Scherier about doing some coverage but it went ignored.

Repeated pleas from gamers  via comments, social media and even The Fine Young Capitalists themselves have rendered from Kotaku nothing but a stagnant wall of silence.

Don’t believe me? Well, the TFYC’s director talks extensively for 17 minutes explaining how they desperately tried to contact media outlets to get coverage. You can check out the full video right here.

Now I’ve seen some people saying that The Fine Young Capitalists didn’t do enough to advertise; but as the video explains, they tried reaching out. They were blackballed.

If you check out the screenshots of their coverage in GNews you’ll see that they only really appear at small outlets or being completely ripped to shreds by major media sites with a serious agenda on their hands (also, the same sites allegedly tied in with Silverstring Media, I might add). They appear in Gamespot’s feed only because people in the comment section were desperately asking why GameSpot had no coverage of The Fine Young Capitalists. Hmm… that’s actually a really good question. I’ll do some digging on that later.

What’s more is that this isn’t just The Fine Young Capitalists doing PR wrong. Earlier this year, before their Game Jam got shutdown, they were receiving some moderate coverage from the likes of GamePolitics and even GamesIndustry.biz, which makes a heck of a lot of sense. You can even see that before the fallout with Silverstring they had some small presence on the search engines earlier this year. 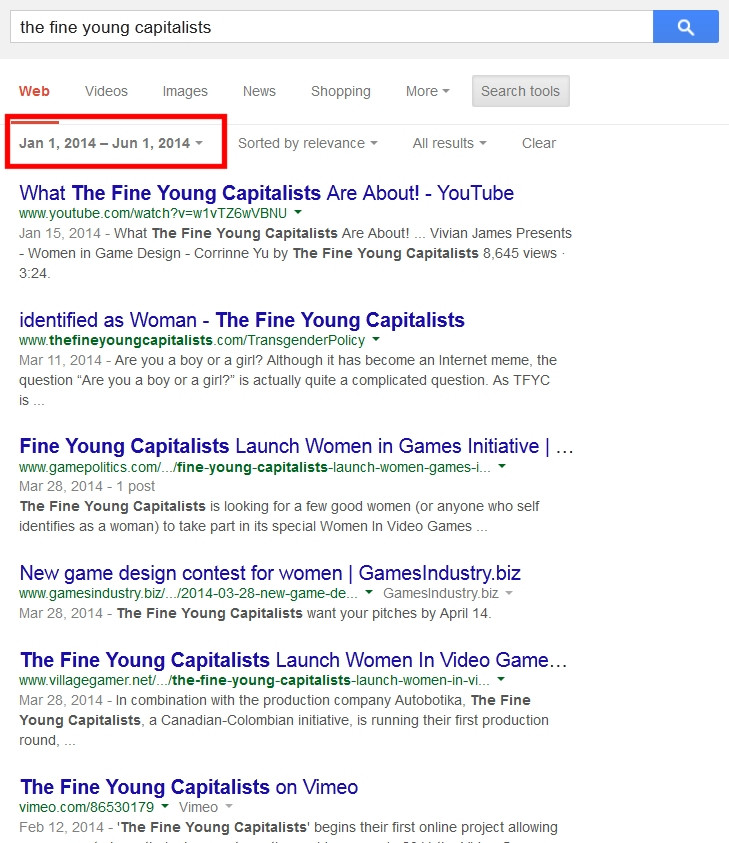 So now why the complete blackout? Why no coverage from these larger sites? It wasn’t always like that. What stops them from doing a 100 word post on it? Heck, does Kotaku need panty shots or a homemade bikini made out of food to get them to bite for coverage? Would that get Kotaku off their collective butts and do something or are they too busy taking a dump on their own careers by demonizing and spreading hate-speech against gamers? 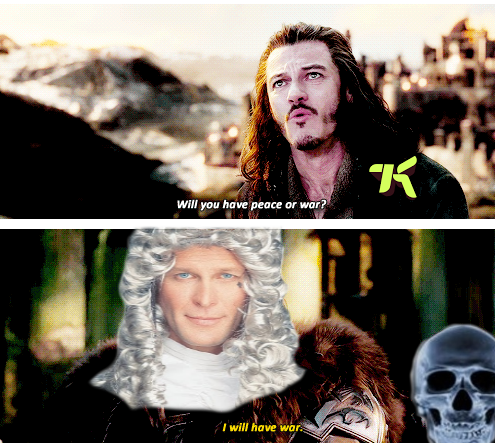 It’s time to stop standing by idly while they usurp our culture from beneath us.

We will be the reapers in the night. The terror of their dreams. The imps on their backs. The devil at their doors. The yoke on their necks. We will be their unflinching burden from here on out and we will find every single dirty deed and backhanded deal to expose them for everything that it’s worth.

They can edit their stories. Change their tunes. Alter their profiles. Retract their stances. It doesn’t matter.

This doesn’t end until gamers the world around from all races, creeds, genders, ages and walks of life stand on the grave of their site’s domain, looking down upon it as a symbol of the past while a newer and brighter star rises in the distance with sites like Techraptor, GamesNosh and GamerHeadlines etched in the sky for all to witness.

The time of the old is coming to an end and the game culture they wanted to kill will be their undoing.

If you want to hit Kotaku where it hurts, contact the people who advertise on their site. You can find the information about their advertisers and how to contact them here and here.

Also feel free to show your support for The Fine Young Capitalists on their official IndieGoGo page.