#GamerGate: ‘It’s Not Over Until Someone Goes To Prison’ Says Game Journalist 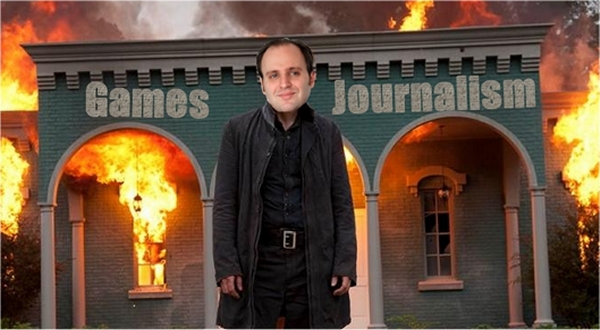 In a private e-mail discussion Toms Guide alum and current contributor to The Escapist, Devin Connors, quips in response to senior gaming editor at Ars Technica, Kyle Orland, that #GamerGate isn’t going to end until someone ends up in “prison”. While the comment may have been made in jest – with some of the information surfacing – I wouldn’t put it past the #GamerGate movement that someone may end up behind bars before this is all over.

For those of you who haven’t been keeping up with all of this #GamerGate stuff. Breitbart writer Milo Yannopoulos managed to get his hands on some  e-mails from a private Google group courtesy of an undisclosed leaker (and no I wasn’t the original leaker). They spilled all sorts of useful information about the correspondence between major players at big name gaming websites, including but not limited to Kotaku, Polygon, Joystiq, Game Informer and even Ars Technica. It painted a picture of collusion and willful negligence to report on specific industry-related issues with proper facts, honesty and integrity.

Following the leak of e-mails, the group’s headmaster, Kyle Orland, decided to close off access to the group.

During my tenure within GJP, I respected Orland’s non-enforced policy where he requested members not to publicly share anything that was mentioned in the group. The post reads as thus. Make no mistake about it, many of them were not friends of mine; and don’t take my respect and adherence to Orland’s privacy policy as camaraderie. In my own code of ethics, I felt I would respect that policy so long as I was allowed in the group (though, to be honest I have no idea why I was allowed in for as long as I was, considering how I outwardly felt about some of them.)

Nevertheless, my access to the group was recently restricted on September 19th, and that means I no longer have to adhere to Kyle’s privacy policy. In other words: all bets are off.

Some of the e-mails from the private Google group known as Game Journo Pros reveals a tight-knit collage of individuals who believe heavily in what they preach from their platforms. Keep in mind that not all of them are bad people, and not all of them are what some people label as “radical SJWs”. But the e-mails definitely reveal that some of them  have become drunk on their own self-aggrandized ideologies.

Orland made a thread in the group called “Putting Gamergate behind us?” back on September 6th, 2014 linking to this blog post on Storify called “GamerOverGate”.

He then proceeds to explain a conspiracy theory that involves 4chan masterminding all of #GamerGate and getting Adam Baldwin, YouTube personalities and prominent academic figures involved just to create dissent amongst game journalists, harass a certain female indie developer and get some “lulz” out of it all. What’s truly hurtful to the platform of game journalism is that Orland gave the “okay” for Ars Technica writer Casey Johnson to post up the following article based on the Storify post, on September 9th, 2014:
https://arstechnica.com/gaming/2014/09/new-chat-logs-show-how-4chan-users-pushed-gamergate-into-the-national-spotlight/

The article had to be modified multiple times and updated given that it was factually incorrect through and through. It originally contained outright lies and pushed a very misleading pretense for those who were not already aware that 4chan did not create #GamerGate. Even to this day, the article still has factually inaccurate claims – such as the one below…

“Discussion logs, however, suggest that #notyourshield didn’t begin as a broad movement but was a campaign manufactured and orchestrated by 4chan users via sockpuppet Twitter accounts. And, according to screenshots recently released by Quinn, so was the original #GamerGate.”

#NotYourShield was started by Jason Miller and Twitter user Ninouh90. Both are black by the way… not “white cis males” sock-puppet.  Miller is known on Twitter by the handle of Polar Roller. I doubt Ars would issue an apology to Mr. Miller for being blatantly racist, no?

If #GamerGate wasn’t about game journalism ethics then that Ars Technica article really does stand as a shining example of why it should be.

Nevertheless, the day the article went up I e-mailed Ars Technica’s editor-in-chief about the purposefully misleading hit-piece and the multiple factually incorrect statements made throughout the article, as it fits the very definition of utilizing a media platform to misdirect and misinform readers; Ars Technica was used to promote lies.

Worse yet is that Kyle’s instant acceptance of the Storify blog instead of fact-checking it – a quick trip to Topsy reveals who started #GamerGate, and it wasn’t a 4chan troll – indicates that he is either neglectful of his duties as a senior editor, inept at fact checking or – as alleged in the Breitbart piece – he was possibly colluding to push a very specific agenda. Either way, it looks damning for someone who holds such a powerful position over public persuasion from the media platform in which they operate.

But to add a bit more context to this whole ordeal, Orland boastfully posted a link to this Twitter post before being checked by a few other members about #GamerGate not necessarily being at its end (I’ll refrain from mentioning their names, as they don’t need any unwanted attention). Orland responded saying…

Funny that the one pushing a false and factually misconstrued conspiracy agenda was Orland… especially with that Ars Technica piece. He’s standing by an article that claims the #GamerGate movement was about harassing a specific female developer, while purposefully ignoring or failing to fact check basic timestamps or key topical points; disregarding attacks and harassment #GamerGate supporters have been incurring; and establishing a predisposed view on how to spin the narrative without any kind of factual objectivity. That is corruption, not a conspiracy.

The lies and misleading information have been nothing but sickening since this all started, all while things such as EA covering up 40,000 hacked user accounts barely gets a mention – oh yeah, and when the incident was mentioned no one attributed it to the fact that #GamerGate helped get that exposed. Funny that, eh?

Some of you might say that Ars should be praised for updating the article with some of the appropriate information, but the thing to keep in mind is that the article (and many like it across major gaming and some mainstream websites) went up with a very specific intent. Facts were not the order of the day; investigative journalism was not being employed and each of these articles (before being modified, altered and updated) went live to push a very strong agenda.

In jest or not, that statement could end up being more true than he knows.

Keep in mind that there are plenty more e-mails; plenty more conversations; plenty more topics from GJP to write and talk about. Of course, here’s hoping that the people who have been caught pushing their social agendas under an umbrella of lies and deception will come clean, admit their faults, resign from their current positions at their current publications and issue public apologies.

#GamerGate is far from over… but I can’t say the same for the careers of those who used their platform to corrupt and deceive. 62 thoughts on “#GamerGate: ‘It’s Not Over Until Someone Goes To Prison’ Says Game Journalist”