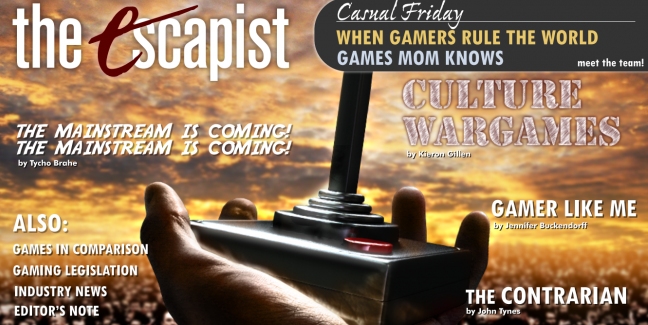 You are winning. Your voices are being heard. Do not quit. As a reward for your efforts, co-founder of The Escapist Magazine has printed a lengthy five-page article that contains the new outline for all of Defy Media’s [Escapist’s parent company] publicized subsidiaries.

#GamerGate has been going on for the past three weeks. Gaming media journalists are growing weary and tired. Pundits of great vocal influence spreading hate-speech against the “gamer” identity have seen their speeches fall flat on deaf ears. The scale of attacks and conspiracy theories levied against #GamerGate lose heft with the passing of each day. You, gamers of a great diverse and collectively unique nation, are winning. You do not support harassment. You do not support abuse. You also do not support corruption in games media.

To help make the notion known that some sites are willing to make good with the #GamerGate movement, public policy notices have been posted. While Kotaku and Polygon may have stated their policies first, they were quick to renege on any extended truce with the community, and dived right back into misrepresenting information and failing to report the facts on very divisive and important issues.

On the opposite end of the spectrum, sites like Destructoid and The Escapist have been very forthcoming about their policies. Co-founder of The Escapist, Alexander Macris, personally got involved with the #GamerGate situation – first interviewing 4chan, and now posting the revised policies for how the sites and affiliates operated under the Defy Media banner will handle ethics and integrity in reporting.

There are way too many points to even quote here, so you can check out the full page here. Basically, it’s all about disclosing ties to superiors, disclosing affiliations to readers and making transparent a lot of the happenings between media and the industry they cover.

One thing worth highlighting, however, is the new rule for allegations, rumors and opinion pieces. I like this part, check it out…

“Before writing about allegations, use best efforts to secure more than one source. The source could be original screenshots we’ve taken of the posts in question, or gathered from reputable websites or newspapers, or other reasonable sources.

“When writing about allegations, we will use language that does not assume the alleged actions have taken place. We will use phrases like “The accused allegedly” or “So-and-so claims that” when describing the events.

“If staff members write personal opinions in a news post or in a forum thread, we will clearly identify them as the opinions of the writer and not as fact.”

I wonder if we’ll see another wave of “Gamers are Dead” hit-pieces aimed at assassinating what little integrity games journalists have left following Destructoid and Escapist “conceding” in the eyes of those who are anti-#GamerGate?

Following the 4chan conspiracy that tried to pin the whole movement on a few gamers in a chat log, I have no idea what they’re going to do next. I guess it’s best to wait and see.

Also, I would advise you to check out the full article on The Escapist, all five pages are definitely worth a read and hit the nail right on the head. Great stuff. And don’t forget to tweet some love to Alexander Macris, because if it wasn’t for him the Escapist forum – and by proxy, a lot of the momentum and support for #GamerGate – wouldn’t be where it is today. So, hats off to you Mr. Macris.

(Main image courtesy of The Escapist)