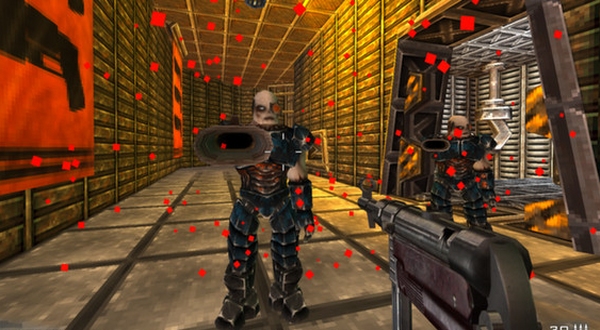 A new first-person shooter from RedBedlam and KISS ltd has launched on Steam’s Early Access. The game is a throwback to classic first-person shooter titles by throwing players into a world where they venture throughout the history of video games; battling in classic Pac-Man style mazes to killing zombie Nazis, the game throws everything and the kitchen sink at players.

A lot of first-person shooter aficionados might find that the following gameplay trailer is strangely reminiscent to TimeSplitters 2.

The game itself sees players put into the role of Heather Quinn as she journeys through the bedlam of video game history. The game is based on the novel from Scottish author Christopher Brookmyre.

The Early Access game is expected to receive monthly updates and the recent entry onto Early Access has just been on the receiving end of three whole hours worth of gameplay content.

The game looks pretty insane, but I don’t know if it’s my cup of tea for one reason and one reason alone… there are no hands!

I know it’s a silly complaint but it was something that turned me off of TimeSplitters and TimeSplitters 2; not having visible hands on the guns and not having proper reloading animations just kind of irks me. But look, that’s just my own pet peeve. I like seeing the sexy animations of magazines coming out of guns or clips being pushed into the receiver; it’s one of the things that really makes first-person shooters stand out.

Nevertheless, the game itself looks pretty outrageous, and the Early Access user reviews have all been positive. I’m not really sure what’s up with the YouTube comments being disabled on the video, but if gamers are giving it fair praise on the Steam page then that means something, right?

You can grab a digital copy right now for $19.99 from the Steam store, or you can hold off, bide your time, watch some Let’s Play videos and then make the choice.