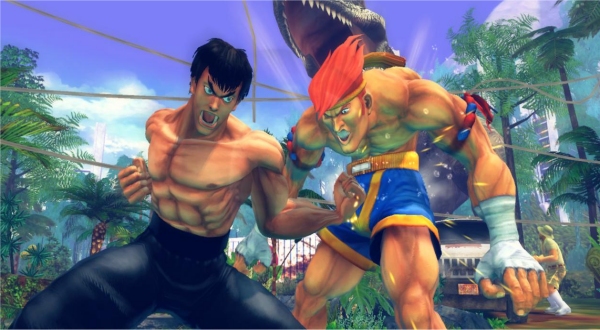 Capcom just sent out word – like literally a few minutes before I typed out the headline – that Ultra Street Fighter IV has released to local retail shops and is available digitally for the PlayStation 3 and Xbox 360. This means that at this very moment in North America (well, if it’s like after 9:00am in the morning) you’ll be able to head to your local GameStop or brick and mortar retailer where you usually sell a piece of your wallet (and maybe a bit of your soul) and grab the latest Ultra edition of Capcom’s premier fighter.

Anyway, Capcom dropped some information bombs during the press release, stating that…

“In Ultra Street Fighter IV, Poison, Hugo, Elena, Rolento and Decapre join the fight, complete with new animations and their own unique play styles, bringing the final roster count to a massive 44 characters. Six new battle environments (including Pitstop 109, Cosmic Elevator, Half Pipe and more) provide a thrilling and colorful backdrop to the action.”

Each of all the 39 fighters have also been improved, upgraded, updated and balanced for the tournament scene. This means that we’re likely to see this version of the game replace the Arcade Edition on the ground floor at local events for those who didn’t already upgrade from the Arcade Edition.

You can grab Ultra Street Fighter IV right now for the Xbox 360 and the PlayStation 3, digitally or physically for only $39.99. I like having something there to grab with the hands, you know? So it’s all physical for me. But if you don’t mind keeping your interaction all hands-off and impersonal, the digital offering is just fine, too. I’m not judging you… (but maybe I am, only a little bit).

Better graphics, better frame-rate, better stability and mods definitely make the PC version the one worth getting. But hey, if you’ve already invested a crap-ton into your geriatric seventh-gen veteran, then by all means, keep pouring money into the life support of the PS3 and Xbox 360.

For more info on the game, be sure to pay a kind visit to the official website.