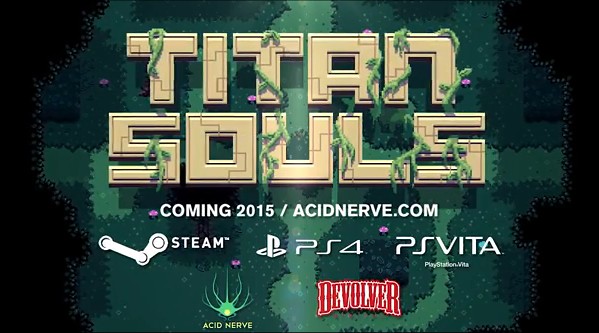 A new trailer has released for the upcoming isometric, sprite-based, adventure action title from Acid Nerve called Titan Souls. The trailer is a basic rundown of the gameplay and the sort of bosses that players will encounter. The game is a bit like Star Ocean and Secret of Mana from the age-old SNES era, but it takes on a sort of Shadow of the Colossus effect with players having to take down giant titans in various, unique environments.

The gameplay looks pretty slick and the concept is righteous. I like the idea that the game centers around battling titans and only having one respawning arrow to use against these titans to bring them down.

You can see how the game plays out in the video below, courtesy of Devolver Digital.

Coming soon for PlayStation 4, PS Vita, PC, Mac, and Linux. https://www.acidnerve.com Between our world and the world beyond lie the Titan Souls, the spiritual source and sum of all living things.

This throwback title will be arriving next year for PC via Steam, as well as Linux (which means it’s SteamOS compatible), the PS Vita and the PlayStation 4. It’s nice to see that SteamOS is continually getting support leading up to its release, even if the games aren’t always super-flashy, mega-ultra, Michael-Bay-approved blockbusters.

My only gripe with Titan Souls is that there’s not a lot of standard press info available on the game. We know that there’s secrets to explore in an “arcane” world, and that players get a single arrow to use against the titans (and yes, it respawns), and that each titan offers players a challenging boss fight, but it’s kind of hard to get a grasp on how far the game goes beyond that. Maybe they’ve done this purposefully so we have a lot more to look forward to when Titan Souls launches later this year?

You can keep track of Acid Nerve’s isometric, adventure-action title by paying a visit to the official website. The title is due for release at some point in the early first quarter of 2015. I’ll drop more info on the game when it becomes available.