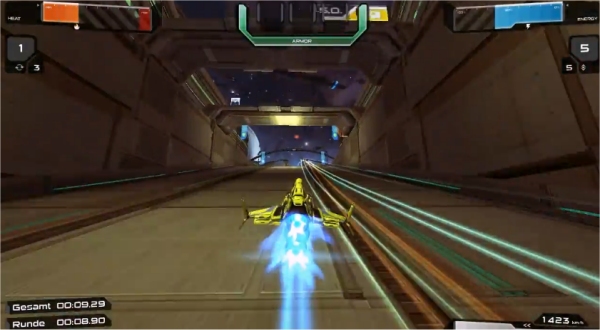 If you like futuristic racing games and you enjoy taking high speeds at unsafe turns, and vertical dips that would put the contents of a lesser-being’s stomach into the interior of the machine that they’re driving, then Quantum Rush is your kind of game. It’s a high-octane, high-speed, break-neck experience that looks about as fun to play as it is to watch. The latest track to be released for the game is called “Selenit Tunnel” and it offers gamers a mechanically-themed racing experience with a serious challenge.

GameArt Studio sent out word that Quantum Rush Online has been updated with the new track, designed for players between tiers 1 and 7. I have to be honest with you: I don’t know what that means.

Anyway, the press release goes on to explain the Selenit Tunnel and what sort of challenges players will face will racing through the treacherous mechanical line…

“Players have to keep in mind how the tunnel evolves and find the shortest driving line. Besides that, rotating obstacles move through the tunnels and complicate driving additionally.”

“At any rate, the Selenit Tunnel is an ingenious racing track with a clear focus not so much on fights but on high-speed racing maneuvers.”

Speaking of fights… Quantum Rush is a game that sports the ability to utilize weapons on the track. While it may be like F-Zero in design and the maximization of speed, it’s also somewhat close to Acclaim’s Extreme-G series where you were maintaining that fine balancing act of trying to stay on the course while also trying to blow the living daylights out of your opponent.

You can see the Selenit Tunnel in action with the new trailer below.

The Selenit Tunnel track is available for tiers 1 to 7 and challenges players especially by blurring the lines between up and down and left and right, when they race at high speed through the narrow tunnels, which are drivable by full 360 degrees.

I’m really rooting for GameArt’s title; I like that they have two distinct versions of the game, the already available online title and the upcoming single-player game called Quantum Rush: Champions, a game that was recently greenlit with some other titles.

We just don’t seem to get enough quality, futuristic racing games these days, and while I haven’t played Quantum Rush, everything I see about the game makes me want to play it. So that kind of speaks volumes for the potentiality of the game’s marketing pull.

You can check out the latest track update for the game right now or pay a visit to the official website to learn more. Quantum Rush Online is currently available on Steam. The single-player game is due for release soon.