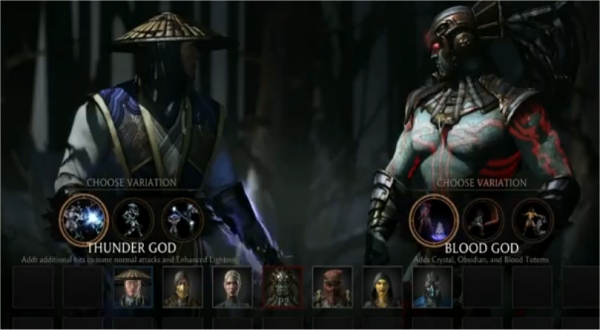 In the upcoming Mortal Kombat X, there are three play-style variations for each pugilist. This opens up the fighter to be played in more than one way, and easily enables players to take a once beaten character and potentially find a weak spot in their opponent by switching styles and freeing up more options to tactically overtake a foe. We get to see exactly how this new feature plays out with a trailer detailing Raiden’s three new fighting styles.

So Raiden’s three fighting-style variations include Thunder God, which enables him to get in more combos on normal hits and extra lightning damage; Displacer, which enables Raiden more teleportation abilities and sparkport skills; and Master of Storms, which is all about setting lightning traps in strategic ways to keep your opponent out of the loop and off-balanced.

Check out the follow-up to Raiden’s Evo reveal with the video below.

Ed Boon has been teasing additional reveals for Mortal Kombat X recently, and it’s become somewhat expected that we’ll get to see a playable version of Kano in action at this year’s GamesCom in Cologne, Germany, especially after those magazine images leaked of the brutal and “scandalous” fighter.

So far I’m pretty impressed with what’s been showcased of the game so far. The fighting in Mortal Kombat X looks smooth and milky sweet like a salty milkshake full of Xbox fanboy tears after the monthly NPD numbers drop (they’ll be available for July within the next two weeks, so prepare the straws). And yet there is a fluidity to the combos that make it appear as if manuals will be possible, very much like they were in Mortal Kombat: Armageddon (for some characters, anyway).

The roster still has a tone of empty slots to unveil, so I’m curious to see who they’ll add next. A few guest spots featuring classic horror villains – much like what they did with Mortal Kombat 9 a few years back – would be pretty cool. How awesome would it be to see Pinhead from Hellraiser in the cast?

Anyway, I’ll keep you posted on any further news and updates for Mortal Kombat X. For now you can scope out what’s already been made public and available over on the official Mortal Kombat website. The game is due for release next year on PC, the geriatric twins and the new-gen siblings.