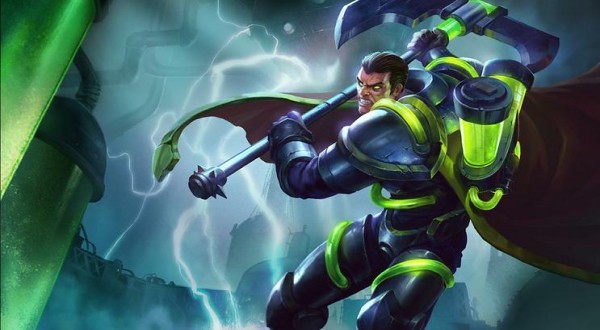 One of the fighter tanks in League of Legends is Darius, a sort of old-school character who probably has a hard time find unique work in the over-saturated MMO genre, and probably had to settle for a low-wage job being overworked and under-paid as a Champion in League of Legends, pumping out moderate DPS as a hybrid fighter/tank. Yeah, the economy hit everyone hard, even those generic tank-warriors from those knock-off Korean MMORPGs. But even though Darius fits the bill as a standard armor-wearing grunt, he may pack a little more to his punch than meets the eye.

Two guides help form what you’ll want out of a top-lane AD character for your playing style. Darius can double down – as mentioned at the top of the article – as either a tank or a fighter.

The first guide from xNAS offers players a little bit of a mixed bag on how to build Darius properly. For instance, you’ll definitely need 9 9runes of Mark of Attack Damage, 9 Seal of Armor, 9 Glyph of Scaling Magic Resistance and 3 Quint of Attack Damage.

You’ll also want Ignite and Flash so that you can deal instant damage and get out of a tight spot if you need to. In addition to this, The Black Cleaver is an absolute must-have for burning through opponent’s armor like a SJW burns through a 4Chan thread. Check out the full video below for the complete list of items you’ll need equipped for early, mid and late game.

These descriptions have been changed due to security reasons. Sorry if any links or anything is missing. Subscribe! https://bit.ly/1N0vTBG If you like my videos and wish to support the channel you can add my channel to your Adblock Whitelist. Thank you! How to: https://bit.ly/1f1nbFf That would be amazing and I am grateful for you all.

For taking complete control of the top lane there’s a very helpful guide on how to control the top lane. Take note that Darius is not good paired against peppers and lane pokers. Characters like Corki and Anivia can easily wreck Darius, so pick wisely based on who your opponents are, since he has a hard time closing the distance, but can open-up big with damage once he does. You can check out more in a video by Bonus Content below.

How to play Top Lane Darius in the Current Meta, with commentary. Follow this Build / Guide and you will be well on your way to DUNKING people to victory! Thanks For Watching Don’t Forget to Sub, Like, Comment and Share with your friends!

It would be pretty cool to see a top-level Darius take on someone like Alistar one-on-one… that would look pretty sick.