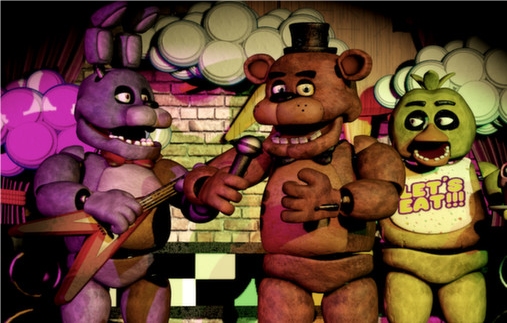 Only in the indie space will you find a game completely off the cuff like Scott Cawthon’s Five Nights at Freddy’s. What makes the game so different and unique? Well, maybe because players are put into the role of a rather shifty night manager of a scummy kid’s pizza parlor place where the main attraction is a stage show featuring animatronic animals. Of course, this all sounds kind of weird and far-fetched as a game… until you realize that as a night manager of the pizza parlor, the animatronic animals don’t always stay put.

One of the things that really stands out is how creepy the animals look. I remember as a kid going to some places that had similar animatronic puppets and I remember being completely freaked out by them, and it looks as if Cawthon used that kind of childhood trauma principle to establish the atmosphere for Five Nights at Freddy’s.

The objective is to monitor the cameras and security measures of the pizza parlor and avoid being killed by the animals. If it sounds like a crazy premise it’s because it is.

As you can see, you have a limited amount of power to keep track of what happens at the pizzaria at night. The more you keep the lights on or the doors closed, the more you risk draining the power.

The game is a nerve-wrecking horror-survival experience that separates itself from the herd with a concept just silly enough to actually seem scary.

Also, there’s no waxing poetics from media and critics just because this is a potential sleeper-hit in the making; gamers are actually completely all-in on the game and are loving every minute of it. The reviews are mostly positive for this game and they celebrate the game’s simplicity and stark creepiness.

In addition to this, Five Nights at Freddy’s is a pretty cheap game. So a few hours for $4.99 isn’t that bad an entry price for the title.

Of course, if you’re unsure about the game, feel free to watch some “Let’s Play” videos from trusted sources for a good idea of what you might want to get yourself into. Need to learn more? Need to see more? Check out the game’s Steam page.