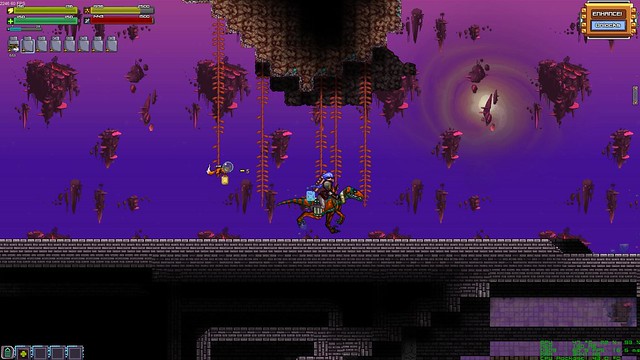 Handyman Studios unleashed a massive content update for their side-scrolling, emergent, space-survival game, Edge of Space. The new update brings along a ton of sweet and sexy features, including procedurally generated dungeons so you’ll get random encounters, loot and bad guys to face down against in unique and unpredictable ways. They’ve also added in the first set of operable vehicles that players can pilot to their heart’s content. Additionally, better performance upgrades and new factions have also been included, making this one of the most significant updates for Edge of Space yet.

One of the new “pilotable vehicles” is actually a space raptor. No, I’m not kidding and you’re not high (or maybe you are, I don’t really know; I don’t live in Colorado or Washington).

Edge of Space has always prided itself on dangerously wacky concepts and they definitely don’t disappoint here. I mean, this is the same game that sports a flying shark with laser beams, and a trolling polar bear with back-mounted rocket cannons. Is a space raptor so hard to wrap your brain around after you deal with a laser-shark?

Jake Crane, lead designer and founder of Handyman Studios dropped some information bombs in the press release, stating that…

“Pilotable vehicles are definitely a major feature for Edge of Space, and we took a big step in this patch by bringing the first of many to come,” … “Another huge feature is the first integration of randomly-generated, dynamic dungeons where players will confront unique creatures, sinister traps, and mini-bosses for exclusive loot. And of course, with help from our awesome and growing community, there are several smaller improvements and bug fixes, bringing a tighter and much more polished experience.”

If the random dungeons and raptor mount sounds too intriguing to pass up, you can snag a glimpse at the features in the screenshots below. Check it out.

I’ve always loved Edge of Space, even though I haven’t had a lot of time to play it. I’ve followed the game since its grassroots in the indie scene when it was trying to gain some legs to stand on during the IndieGoGo campaign, all the way up to its addition to Steam Greenlight, and even into its release on Early Access. The game is like a more hardcore version of Starbound with bigger guns, better guns, more explosions, more dangers and plenty of sci-fi inspired content from some of the best films, shows and significant cultural media artforms that helped shape the genre.

You can scope out a list of some of the game’s updated features in the latest patch below, or you can pay a kind visit to the game’s official website to learn more about Edge of Space. You can grab a digital copy right now from the Steam Early Access platform.

Greatly Improved Gameplay Experience: Thanks to the amazing feedback of the growing EOS community, this update delivers a huge assortment of bug fixes and improvements that include: