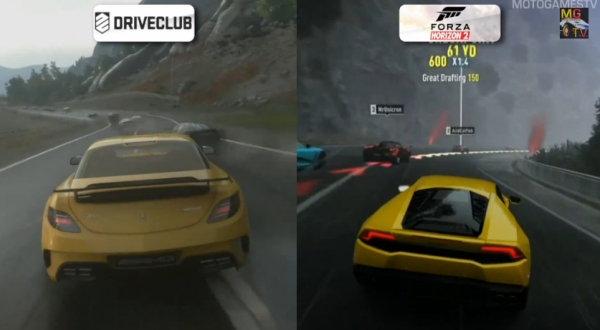 As you all know, I hate rustling jimmies and slurping up fanboy tears. I avoid at all costs any sort of situation where butthurt or saltiness may occur. Well, that disclaimer would apply if I worked at a website where keeping the peace and maintaining “fairness” and “parity” was par the course, but I’m not that kind of guy and this is not that kind of website. With all that said, there’s a pretty startling look at the graphics disparity between Forza Horison 2 and Driveclub, and I have to say that Sony’s exclusive just completely wipes the floor with Microsoft’s exclusive… as far as weather effects go.

It’s only a 27 second video but it shows enough details to give gamers a look at what to expect from both games, and anyone who was a bit undecided about picking and choosing between the PS4 and Xbox One when it comes to racing game exclusivity will easily see that if graphics play a pretty big part in your buying decision (more than 75% of gamers say graphics matter when purchasing a game, according to a CEA survey). Check out the brief video comparison courtesy of MotoGamesTV.

There’s a couple of notable differences between both games, such as the fact that the rain has accumulative fog in Driveclub that settles over the track, as opposed to Forza Horizon 2 where the fog is only present in the background of the racing environment. What this means is that in the case of Driveclub the player’s car, the track and the rest of the environment seems immersed into the visual effects.

In the case of Forza Horizon 2 you can see that the player’s car almost seems to be popping out of the screen in front of the post-processing effects – there’s a stark clarity in how it’s rendered mostly because there are fewer effects being rendered to the screen. Forza Horizon 2 lacks the same level of dither, color correction for the cloud overcast (at the beginning of the clip) and lacks the same level of reflective shadow modeling to properly reflect the environmental changes that take place throughout the clip (notice that from the 13 second mark to the 15 second mark the reflective shadows on the Lamborghini in Forza Horizon don’t actually change even though it transitions from an overcast to a sunny sky). 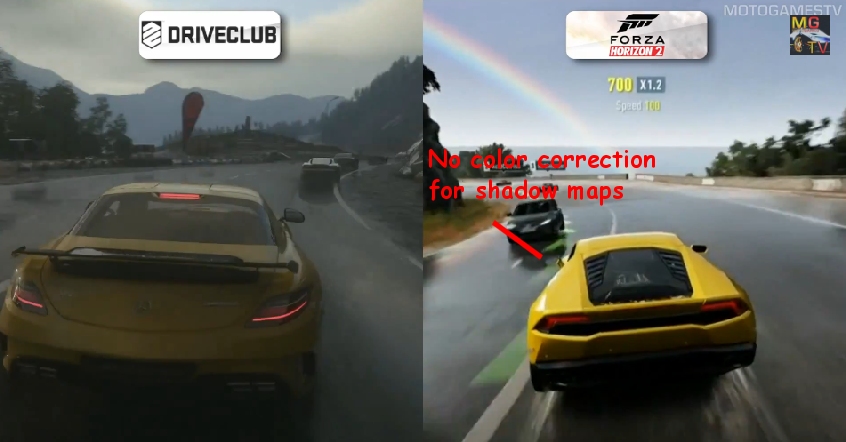 Interestingly enough, both games are running at 1080p and 30fps and yet we can readily see that while both had to forfeit 60fps in order to hit certain levels of graphics fidelity, there’s an undeniable difference between how the PS4 achieves 1080p at 30fps compared to how the Xbox One achieves 1080p at 30fps, and the disparity couldn’t be more clear.

Obviously, the exclusives really are telling this gen in terms of the difference between hardware and with this generation still being so early on, we’re going to be seeing this kind salt-inducing comparison crop up time and time over again with genre-comparable titles. At least we know that opposite of parity-achieved games like Call of Duty: Advanced Warfare, exclusives won’t play down the capabilities of the PS4 to keep the suit and ties happy.

I don’t have much interest or stock in Driveclub being a very good game, but as far as graphics go, it definitely seems to beat Forza Horizon 2 on the weather front.