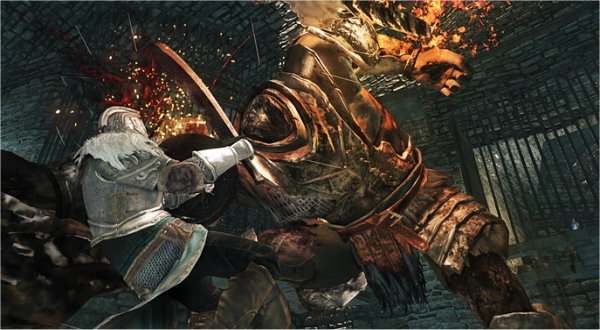 Bandai Namco sent out word that the next installment in their trilogy of DLC for Dark Souls II has launched. The second entry called Crown of the Old Iron King has become available on the PlayStation Network, the Xbox Live Marketplace and on Steam for PC. So if you’re in the mood to scavenge for the goodies hidden and buried by dead, crusty old kings.

The game itself has made a name to fame based on how hard it is. I have one of the Dark Souls games but it’s one of the many games sitting in my library that I haven’t yet installed.

Still, gamers are loving Dark Souls II and if the new DLC is selling well then it means they like it. According to the press release…

“Players that survived the Crown of the Sunken King DLC are surely brave enough to take on this next arduous journey to explore new environments, vanquish horrid enemies, solve traps, and defeat gruesome bosses. Crown of the Old Iron King features an entirely different environment to conquer compared to Crown of the Sunken King; players will see a world ravaged by lava, heat, and ash and of course… death lays in wait around every corner.”

Bandai Namco is playing the DLC season pass card where players will be able to either purchase each of the parts of the trilogy separately or together in a single package. If it works for the big boys it should work for the middle-of-the-road publishers, too, eh?

Well the Crown of the Old Iron King is available right now for only $9.99 on Steam, PSN and Xbox Live. If you haven’t purchased any of the DLC for Dark Souls II Bandai Namco has a season pass available for $24.99 that features all three DLC packs together.

If the new DLC tickles your fancy then you can pick it up right now from your local digital distributors.
If not, well, there’s always Lords of the Fallen.