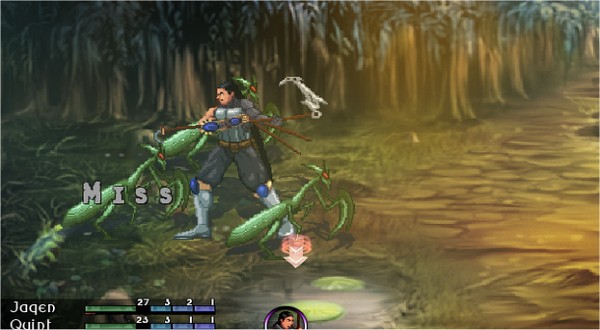 White Guardian Studios has a brand new game on the way called Celestial Tear: Demon’s Revenge. The premise sounds pretty slick, as players take on the role of Sen, a heroine who forges a legacy with other formidable characters centered around the conflicts involving prejudice and racism on a war-torn planet. The game aims to strike a fine balance between character development, story and classic role-playing tactics. The graphics are somewhat surprising and the combat is a nice throwback to the turn-based mechanics.

One of the reasons I say the graphics are surprising is because the character and enemy designs have a similar art-style to the 90s 2D, sprite-based fighting games. It reminds me of World Warriors or the original SNK Fatal Fury titles. They aren’t the most magnificent designs in the world, but I actually genuinely appreciate the look of the game.

You can briefly see how the game rolls out in action with the teaser trailer below.

The game – outside of combat – is played like the typical isometric RPG; you visit towns, you talk to people, you pick up quests… the whole shindig. It’s as much a throwback as it is an advancement on concepts, story and character development suited for today’s generation of gamer. I have no idea how well it’s all going to play out but I’m loving the old Phantasy Star vibe that the game gives off.

The team at White Guardian Studios plan to take their idea to Kickstarter. It’ll be going live soon and I’ll likely do an updated post about the game when it does drop on the crowd-funding site.

If you want to get in on the game’s action before it officially releases, White Guardian has a demo available for the game over on their official website.

You can also check out additional screenshots and videos as well if you want to acquaint yourself with the game before the Kickstarter gets underway. I’m not going to say it’s the greatest thing ever, but it looks like it could be a genuinely fun game.