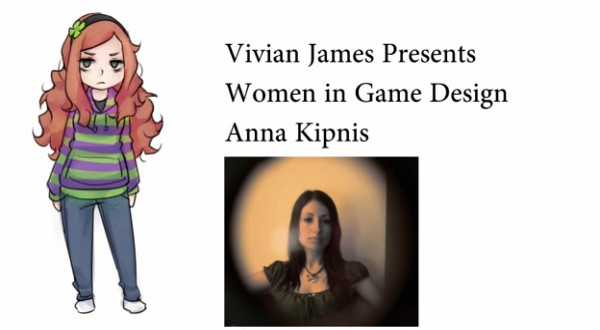 It must make certain people burn inside knowing that the group that has been labeled as rampant misogynist are doing more pro-feminist work to raise awareness and support equality in game culture than the people attacking them. Strange times, eh? Well, 4chan and The Fine Young Capitalists are continuing to move forward with the “Vivian James Presents” series, which is a short video featurette for various prominent females in the gaming industry, and this episode focuses on design programmer Anna Kipnis from Double Fine.

The video is hosted on The Fine Young Capitalists YouTube page and runs just under three minutes, so it won’t take up a lot of your time. I’m not going to waste any time preventing you from getting to the good parts, so you can check out the video below.

Now I’m sure there are some of you completely confused about what all this stuff is about and why. A simple retort is to watch two videos here and here.

The basic gist of it for those who don’t feel like watching anymore videos: The Fine Young Capitalists had their original game jam doxxed and shutdown. They tried to make a comeback but couldn’t get any kind of media support from major gaming outlets due to their ties to the nucleus sitting at the center of the controversy. If they report on why TFYC’s campaign was originally shutdown then they would have to expose their own skeletons in the closet. To prevent the skeletons from flailing around like Clint Eastwood on a trampoline, they all decided to just enact a media blackout on anything remotely related to the cause of #GamerGate.

Right now you’ll only find horrible bias and poorly research articles about TFYC (warning, the information spinning in that article is enough to make your head spin) or smaller sites and community movements trying to get the word out about the movement. The crazy part about it is that gamers now have to be the proper media enthusiasts that the larger gaming sites are supposed to be.

4chan and the TFYC will continue to do the series in hopes of finally gaining proper traction and support that they need to expose the corruption that led to the game jam being shutdown in the first place.

You can support The Fine Young Capitalists or learn more by paying a visit to their IndieGoGo page.