4Chan Presents A Women In Games Tribute To Corrinne Yu 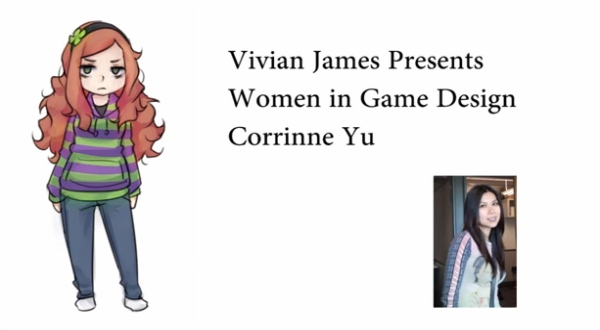 It now truly feels as if we’ve stepped into bizarro world, where gaming journalists hate gamers, the biggest troll site on the internet, 4Chan, now actively supports feminism in a respectable way, and Tyler Perry is even in a David Fincher film… like really? Really? Man, if I had come across all this news after going to sleep I would have thought I died and ended up in the Twilight Zone. Nevertheless, all this news transpired during the waking hours of the day and that’s what makes it even more bizarre.

So for those of you who haven’t been keeping up with all the drama, the short gist of the story is this: 4Chan was framed for doxxing people within the gaming industry. In order to retaliate the members of /v/ (the video game thread of 4Chan) decided to donate to an IndieGoGo campaign to show their support for female game developers and the growth of creative and equal-opportunity ideas within the gaming industry, hence the community pledged $5,000 on the very first day to The Fine Young Capitalists.

After some hardships and stumbling, the campaign picked up quite a bit of momentum, all thanks to 4Chan.

The lovely part about it is that the group not only donated large sums of money to The Fine Young Capitalists, they also designed a character named Vivian James, a female protagonist to represent equality and video games.

Beyond that, 4Chan has been working with The Fine Young Capitalists to do the opposite of a certain other individual and a series of trope videos, to actually show the positive, good and productive side of females in the gaming industry. It’s not all about making one sex feel guilty for enjoying games; it’s about making both genders feel proud to call themselves gamers.

With that said, check out the video below featuring a spotlight on Corrinne Yu, a graphics engineer who is currently working at Naughty Dog on the upcoming Uncharted 4, as presented by 4Chan and The Fine Young Capitalists.

Short; to the point; informative. No complaints.

I don’t know how much time or dedication 4Chan will devote to The Fine Young Capitalists, but if they keep this up while the group finishes up their IndieGoGo campaign that would be a pretty fine thing of them to do.

I just like the fact that out of all of the ugly that has been spread about from the nucleus of this matter, the one group where no one expects good things to come from, went and did good. Not only are they doing right by gamers, right by feminists and right by The Fine Young Capitalists, they’re showing that the real evils in today’s gaming industry are the self-serving hypocrites running the larger outlets.

But then again, at least Reddit is making it easy to spot out which sites to avoid.

You can support The Fine Young Capitalists over on their IndieGoGo page right now or check out more info over on their official tumblr page.