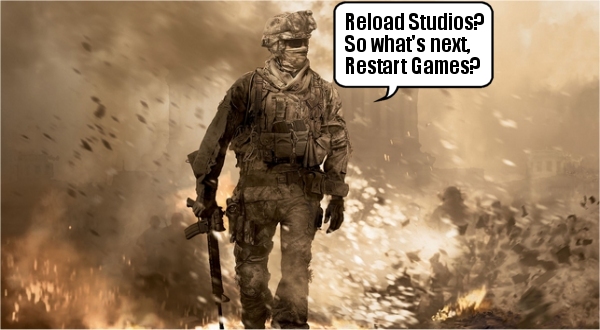 IGN picked up the news from an unreleased press release floating around on the official Reload Studios website. The new development outlet is headed up by James Chung and Taehoon Oh.

So get this, the duo leaves Infinity Ward to start their own gig with 10 other members (two of which are in an advisory role) and their first project will be a fast-paced… shooter. That’s right, they’re working on a first-person shooter designed for the Xbox One, PS4, virtual reality devices and mobile handsets.

“People are always looking for something new. Just as smartphones changed the way we live our lives, I am sure VR will change the way people experience media content. As a game developer, this realization compelled me to become part of a new team that focuses on developing VR content.”

It always amazes me when people forfeit their position at a big-name studio, leave and then go do the exact same thing on a smaller scale… hm, almost like this site, eh?

Anyway, this marks the third company to annex their presence from Activision and form their own little island entity in the development space. The first group to part ways from the Call of Duty franchise and do their own thing was U4IA Games – pronounced “Euphoria” Games – with Offensive Combat and then they were followed by the two leads on Call of Duty: Modern Warfare and Modern Warfare 2, Vince Zampella and Jason West, who decided to form Respawn Entertainment with their inception into the big-leagues being Titanfall, the recently published first-person shooter from Electronic Arts.

In this case, we have a group coming in kind of small and aiming to do something big. How well it’ll work out is anyone’s guess. If I were a betting man, though, I would definitely not put too many chips on this VR-focused title being the next Call of Duty-killer.

You can learn more about Reload Studios by paying a kind visit to their official website. I’m just wondering what the next studio will be named from the group of developers who decide to upchuck from the CoD franchise? Restart Games maybe? How about Rage-Quit Inc.,? They might settle with something a bit more subtle, like Fight Against Grenade Spammers.

One thought on “Ex-Call Of Duty Devs Form Reload Studios”