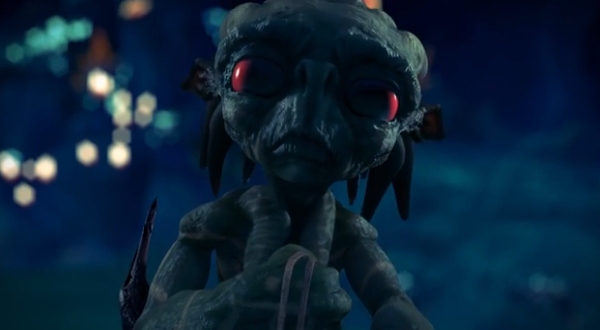 An upcoming game from 2xCubed called Double Happy Vs The Infinite Sadness has just received a cinematic teaser trailer. It’s impossibly difficult to really make out a cohesive idea of what to expect from the game based on the CG video, but if the game is anything like the video then we could be looking at a new-age version of Abe’s Oddysee… well, that isn’t New ‘n Tasty… you get my drift, I think.

The trailer was recently released over on YouTube to test audience reception. It hasn’t yet gone viral and probably hasn’t seen the light of day on larger websites yet. No worries, I’m sure that’s all going to change soon enough. You can check out the Pharos trailer for yourself and see what you think of it, and just below we can get into the nitty gritty of it all.

So if all of that didn’t initially make sense to you, the game itself will be a comedic adventure title with “single player co-op” mechanics, cited to be similar to Brothers: A Tale of Two Sons.

The story plot is as follows…
blockquote>
“The once majestic isle of Pharos is one of many exotic worlds that have succumbed to the overwhelming power of the Infinite Sadness. Inhabitants great and small have fallen to the darkness. In their time of need, the cosmos grants Pharos a pair of cosmic non-rabbits to return the status quo. Is it too late? Or is Double Happy’s inane good cheer just the antidote Pharos needs?”

I was quite impressed with what was showcased in the Pharos teaser. If the game looks as good or plays as dynamic as what was on display above, then I think that 2xCubed has a nice chance of taking the industry by storm with a potential sleeper hit.

Of course, teaser trailers – especially those made with cinematic quality graphics – are rarely ever a good indicator of what the game will actually be like (Dead Island anyone?).

Even still, Double Happy Vs. The Infinite Sadness has an interesting enough theme working for it that it could make it a worthwhile game to keep an eye on. You can keep a wandering on the official website like an old perv watching women roller blade on the boardwalk at the beach, keeping keen on potential updates and news for the project.