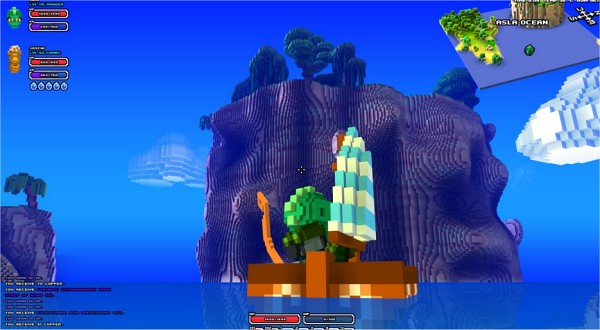 It’s been a long time in the making but Cube World, the open-world 3D game designed to look like 8-bit pixels is finally getting a major update. I know this game seemed about as dead as a certain King of Pop, but that’s actually not the case and the game is still being worked on even as this article is being typed out.

Wollay is still hard at work on bringing the game to life, and Hardcore Gamer recently spotted a new video preview showcasing some of the major changes and upgrades coming to Cube World.

One of the big new updates is with the quest system, where players will no longer see quests on the map, but instead they’ll have to explore and seek them out. Some modifications have also been made to the game’s world exploration, as well as a new biome to explore.

Many of the new features are highlighted and showcased in a pretty snazzy six-minute gameplay trailer below.

Cube World came bustling onto the scene last year with a heck of a lot of momentum and tons of strong support from the YouTube gaming community. However, the game quickly lost a lot of its favor and support when the developers would go silent for long stretches of time without any word about… well… anything.

It’s understandable that some members of the gaming community would get antsy like Edward Snowden flying over U.S., airspace, but the reality is that Cube World isn’t dead and it’s not dying. The game is just developing at a really, really slow pace.

Even still, if you want to want to get in on the action and check out the progress made so far – and by all accounts, if you’re into procedurally generated, open-world RPGs Cube World is right up your alley – you can pay a kind visit to the game’s official website.