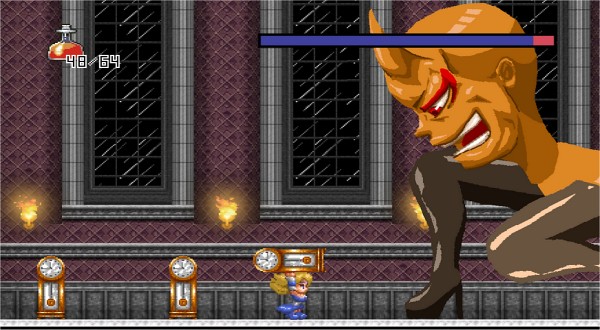 I should note, however, that the game has arrived on the Xbox Live Indie Games channel (also known as the XBLIG channel) and not the standard Xbox Live Arcade channel.

Before further discussing the game, you might want to take a gander at the game’s trailer. Scope it out below.

If the trailer didn’t seem to ascribe any sort of sense to the plot or purpose of the game, don’t sweat it, there’s a description primed and ready for consumption via the press release. Check it out…

“You are Sarah, princess of the peaceful realm of Kaleiya. The quiet life of your kingdom was lost the day your father was seduced and then kidnapped by Lilith, a demon mistress. Her only desire is to dominate your empire and kill you. Use your powerful sword to kill all Lilith’s minions, then quickly throw the dead body on the next enemy to perform amazing combos!”

I tell you the honest truth, I think the only reason this game pulls in any sort of traffic at all is because of that box art poster. That bombastic bedizen plastered around the protagonist’s buxom body is probably the cause for all the clicks; but I’ll reserve judgment because it just might be for all the amazing gameplay mechanics people were interested in, eh?

You can learn more about Amazing Princess Sarah by paying a visit to the game’s official website. Alternatively, you can upvote the game over on Steam’s Greenlight Page or pick up a digital copy from the Xbox Live Indie Game channel.