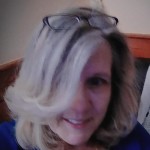 active 6 months, 2 weeks ago
@ladyduck Hi Anna, so nice to see you here. I hope you’re going to blog all those delicious recipes that you make. View