On a jewelry forum we have monthly challenges, June’s challenge was to use up some of our “bead soup”. Bead Soup is the beads left over from other projects you just toss in a drawer and hope you can use in some project later down the road. My jewelry for years has been made from bead soup, random glass bead mixes bought at the store, that’s what I first used when I started creating jewelry, for example the geometric wire charms with beads were made from bead soup. I’ve been a fan of gypsy/boho styles for a long time (though I was never encouraged to delve into it until recently). I decided my bead soup challenge pieces would be boho-chic themed and created these bangles (I’ve used the same method before to create bangles from glass beads, on my jewelry site the glass beads one are called “Rock Candy”). These bracelets are made from a mix of wood, bone, plastic, resin, glass, and gemstone beads. Five out of six are done in the bangle style (using a single piece of wire to form the catches and the form without cutting the wire other than the original cut for the length needed). The sixth bracelet (top right hand corner) has been strung on beading wire asymmetrically. The large orange charm is a recycled necklace pendant. The green tassel on the bangle in the bottom left hand corner was hand-made; my favorite thing about these bracelets is that they never come out the same.

I can’t take credit for naming this collection though, my friend Alex said they reminded him of the trinkets Hoggle asks for in “The Labyrinth”. If I remember the movie correctly Sarah is trying to get information from Hoggle who refuses to say anything useful at all unless she trades him something. He takes a liking to her jewelry and the deal is struck.

Currently these are not listed for purchase yet now that I have a new memory card for my camera I can take better quality photos, these were taking with an android phone and posted to instagram.

I finally got around to going out for more jewelry supplies yesterday.  Between hosting boyfriend’s friend and neighbor, winning both rounds of “Cards Against Humanity”, and the errands we ran before the guests arrived, I sat on the floor creating keys.  Yesterday I made 32 keys and today’s keys brings the total to 50!  There’s 5 different groups (bead patterns) and each group has five keys in silver and another five in gold (craft wire).  My fingers are sore and slightly purple because its been a long time since I sat for so long working with wire and pliers.  Tomorrow I will list the keys in my shop.  I’ll be taking a break from jewelry making tomorrow as well and focusing a bit more on my writing since I have the starts of a novel stirring around (parts of which I’ve written on a notepad app on my phone while running those errands…I have no idea how to not multi-task). Rings created from buttons feature the words “Garde Champetre” (French for Rural Guard). The Rural Guard is a job similar to a forest ranger/game warden, looking out for the well-being of nature. I only had 4 of these buttons so I’ve created these rings in 4 sizes 6, 7, 8 and 9. If you would like click here to purchase.

One of the more common handmade jewelry items is the Tree of Life pendants that many artist make.  This pendant features real turquoise stones (tree) and handmade glass beads (necklace).  Both the turquoise and the glass were given to me after watching my friends kids while she and her husband repaired their home from storm related damage.  I took photographs of the creation process to create a tutorial of a similar pendant, however there are plenty of Tree of Life tutorials out there, many better than my own.  If you would like to view how I created this pendant you can see the tutorial on my deviant art page. In 2009 I hadn’t set up an online shop yet and I was playing with business names ideas, Elleinad was my middle name spelled backwards. In the years since then I settled upon Ideas are Brewing for the business name with my mom. We’re avid tea drinkers, and when we craft together we brew up ideas (and its a play on the words we use for our email address “beads and wire”). I’ve also stopped using my first name and have gone to using my middle name without the first letter to create the unique name Anielle. Most people I meet though are unsure of the pronunciation (‘ah’-nail) so I’ve been nicknamed Ani (pronounced just like Annie). The rings and pendants you see in the image are no longer available some were bought and some got lost in a move however if there’s something there that you do like, let me know and I will recreate it for you (if you request a ring please let me know what size I can make any size up to a size 15). After helping a friend by babysitting her 4 kids for a weekend while she and her husband cleaned up house and repaired the hole in their home (caused by a down tree after a hurricane) I was gifted with some times they no longer wanted but felt I could use. There was a good chunk of jewelry supplies, framed art, and an autographed book! This is a bracelet I made using plastic turquoise beads and a button; this was given to my mom. 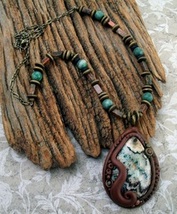 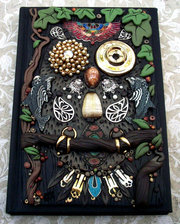 Jewelry and art can be created using a variety of mediums from beads and wire, metal and gemstones, and polymer clay. Chris Kapono (Mandarin Moon on Deviant Art) creates whimsical jewelry and found object art pieces including journal covers, decorative tiles, jewelry, wall art, decorative bottles, boxes, and more. Kapono has been creating polymer clay jewelry and art since 2008. Kapono’s work is inspired by nature; each piece handcrafted, has an organic and natural feel. Clay is mixed with pigments, vintage jewelry, keys, gemstones, and more. You can find Kapono’s work on Deviant Art and buy her work from her Etsy shop.

Polymer clay isn’t actually clay as it contains no clay minerals; the sculpt-able material is called “clay” because it can be manipulated like clay. Polymer clay is actually based on the polymer polyvinyl chloride (PVC) and liquid plasticizer. Bakelite was one of the original polymer clays but it’s time in the public was short-lived because of the phenol base in the raw unbaked clay was flammable. Later an unsuccessful experiment meant to be used as a use as a thermal transfer compound became Sculpy. A visitor to the lab some years after the project was scraped began playing with the substance and the final figure was baked in a lab, thus “Sculpy clay” was discovered. 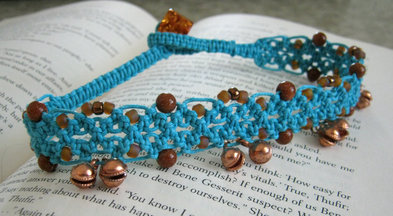 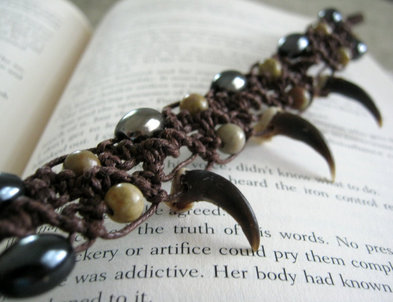 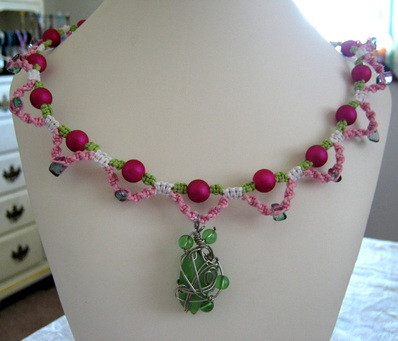 Macramé is an old art form that uses cords and square knots to create art such as jewelry, clothing, and an assortment of decorative items. This art form reached its peak in popularity during the Victorian era and is believed to have originated during the 13th century. Arab weavers of the time would create hand-loomed fabrics; excess threads would be knotted into decorative fringe. Although the word “macramé” is Spanish, it is possibly derived from the Arabic word “migramah” meaning “to tie.” However, this art form did not reach Spain until after the Moorish
conquest.

Sailors used to pass their time by “square knotting.” These men would decorate items such as knife handles, bottles, belts, and more with macramé. When the ship would reach port, the men would sell or barter their creations. Due to sailors, macramé spread to china and the newly discovered Americas. Later, during the 19th century, sailors used macramé to create hammocks.

The world saw a decline in macramé after the end of the Victorian era; eventually a comeback occurred during the 1970s. Macramé is still rising with its new-found popularity, especially among the neo-hippie/bohemian sub culture. Today macramé is primarily used to create jewelry. This style of jewelry is created using square knots (right over left, left over right) and half hitches. Macramé employs the use of knotted cords (hemp, cotton, yarn, etc.) and other items such as wood, glass, or gemstone beads, bells, and pendants made of various materials. Artists typically use a board either card board or corkboard to pin down the cords in order as each knot is tied. However, if an artist is creating a much larger piece, such as a wall hanging (or for the more ambitious; curtains) the cords would be stung and knotted on a dowel rod. Cavandoli macramé is a style that creates geometric patterns. This form of uses the double half-hitch knot sometimes the reversed half-hitch is used to create balance when working opposite sides of a symmetrical piece.

Artist Renee Boyett of NayNay Macrame brings whimsy and playfulness to her pieces with her color combinations, verity of materials, and her own unique patterns. Renee has been creating macramé jewelry for over 20 years. She says “My goal is to create work that can be seen in fashion shows, at formal events, and with casual wear.” Renee, like other artists, uses a verity of materials; common cords materials are: hemp, satin ribbon, and silk. Renee says “If I can tie it, I’ll use it.” Her pieces also feature gemstone, pewter, and carved wood pendants, as well as wood, glass, gemstone, and bone beads. Renee also likes to incorporate “clapper-less bells” into her pieces, these bells are clustered in groups of two or three, and create a light ring when worn. Renee has also done many collaborations with other artists the most notable partnership is with Kyla of Balthasar Craft. Perhaps Renee’s most whimsical pieces are those that feature free-form, wire wrapped pendants created by Kyla. Kyla’s pendants are typically sea glass or shells (known also as“found objects”) for the center piece wrapped with wire and embellished with glass or gemstone beads.

Considering I’m away from home and the majority of my jewelry supplies I thought it might be nice to share off some of my older pieces (most of these are still available for purchase, if you’re interested in a piece leave a comment here or visit Ideas are Brewing). I’m not talking the 80s version of geometric jewelry that was popular only last year, I’m talking something a little more current.  One of the appealing aspects of geometric shapes is symmetry, but I have never been one for symmetry.  Asymmetrical doesn’t always mean unbalanced though, so I’ve blended it all together in these cute little charms.